This is a bike I built for a client, Chris Worrell. It's somewhere in the wilds of New Jersey now. Before I shipped it out, Curt Lout shot it for Dain Gingerelli at IronWorks magazine. This was like 16 months ago.

Well, I figured Dain decided he didn't want to run it in the magazine after all, and I kinda forgot about it. Well, today I get this Email from Marilyn Stemp. They're putting the next issue of IornWorks together, and she'd like to run the feature on it! She sent me the tech sheet, and we're good to go once she calls and get the story on it. Chris is gonna be stoked when he finds out his bike is gonna print. Nice, and thank you Marilyn, very much!

Here's one of the shots from the photo shoot for the magazine......... 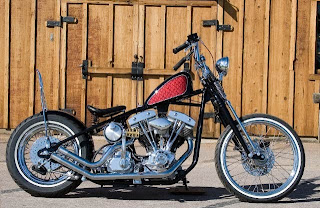 Here's a few shots I sent Chris W. while it was going together. It's a 93" S&S Shovel/5sp kickstart-only. The oil filter is mounted where the 5 speed's starter would go, and the battery is under the tranny. All the wiring is run thru the frame. I friscoed the tank, and Brian at Alterior Motives did the kickass deep euro-black paint, with red metalflake fishscale panels. Rody handled the red and white pinstriping.... 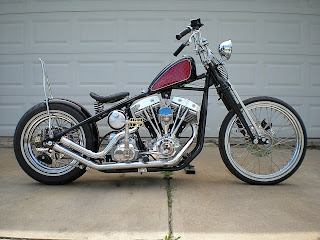 Here's a TQ L/H shot. Chris wanted the sissybar bent to match the wishbone frame's downtubes. Check out the front disc brake on the 2 over springer. I found a true 2 piston Brembo caliper here at the Brembo distributor in town, and I sent the caliper to Fab Kevin, and he cut the stainless bracket for it. This fucker STOPS! You can just see the leather padded diamond stitch solo seat that Dan @ Bitchn' Stichin' did. 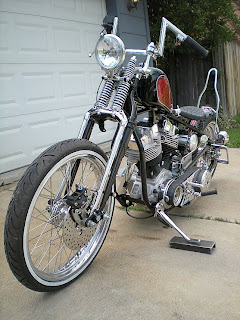 Chris was adamant about having mids and a jockey shift. So, I made the inner motor plate and outer beltguard, and with the help of Rick LaBriola (L.A. Jockey Shift) he came up with a modified version of his cable-activated 5 speed foot clutch I could run thru the primary. And, NO! Rick won't do another foot clutch like this, so don't ask! You can also see the engine-turned blanker plate I did to hide the exposed webbing on the L/H side of the 5 speed's trans case. 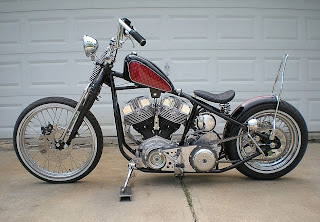 I'm not gonna let you see all the trick stuff on the bike, there's a lot more. You'll just have to wait until the magazine hits the stands to see everything. But, this should get you a little interested. I'll post up when it comes out.
Posted by Irish Rich at 10:39 PM

And this oil filter mount/plate is where mine came from for the never ending build (if I'd stop fucking with other stuff). Thanks again, Rich.

i love how that foot clutch is set up, nice and clean, plus it's safe with the belt guard on!

That's a beautiful build Rich, congratulations on getting her in the rags! I'll be sure to pick up a copy when it comes out.

If I may self promote here for just a sec., this great machine from Rich is indicative of the type of beautifully detailed bike we will be featuring from here on out in IW- I describe 'em as " real, bikes worth celebrating"

i dont see Easter Eggs in our future

Well, Steve, I had no idea you followed my blog.I appreciate the kind words, and everybody else's who've commented.