Dan here in Denver has wanted to "rigify" (is there such a word??) his Sporty, and a couple weeks ago, he finally decided to pull the trigger. So, per Dan's instructions and specs, I called Pat at Led Sleds, and ordered his hardtail, fender, battery box, and oil tank. I gotta say, Pat and his guys busted ass to complete the components, and shipped them to me ASAP. I owe you guys one for such quick service.

This is the part I hate, pulling a Sporty down for framework. I think it's the enormous amount of wiring for such a small bike, and pulling the engine that I don't look forward to. I do it the easy way - if it's a hardtail job, I strip everything down, lay the frame/engine on it's side on a wood block, and then unbolt the engine, and lift the frame off. I put them back in in the same way! 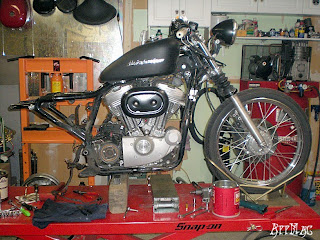 This is the first one of Led Sleds' hardtails I've used, and from what I see so far, everything is a quality piece. We'll see as we go along how well it splices in. 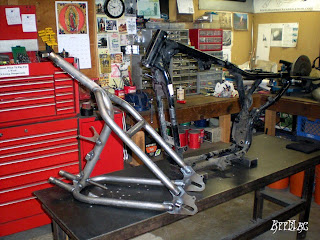 Dan is going to have me make him his sissy bar, and his exhaust while I have it here for the 'tail, and in the future, he'll have me frisco the tank. Stay tuned.......
Posted by Irish Rich at 10:02 PM

Led Sled in Dayton? Nice dudes. I've been to their shop a couple times for their "open house". Bands, burnout contests, trick bike riders and a bike sacrifice at the end of the night; totally NUTS. The owners hot rod truck turned up 2x in gkm #3. I thought I had heard they went OOB. Glad to hear they are still around!