A little update on my lathe....

If you go back in the archives here, you'll see the posts I've previously done on my Harper & Reynolds lathe that I bought from Rip Rose's (Ridin' With Rip) daughter Kristina Marie a few years ago. I've been slowly working on it (slowly being the operative word here) when I can, and it's pretty close to going into service.
To briefly bring you up to date, the lathe was made in 1887, and it was originally in a steam-powered machine shop. In 1924, it was "electrified" with a big honkin' GE 220v motor, and the lathe and motor have been in service ever since. I took the motor in to a shop here in town that specializes in old motors like this, and the guy said it'll run for another 100 years! Tommy's dad, who's a retired machinist, smiled and told me when he examined the lathe itself, that it was tight as a drum, and I can expect it to do everything I need it to forever if I keep it lubed and adjusted. Part-timer Steve thinks I'm giving it to him when I die, but I'm taking it with me...... 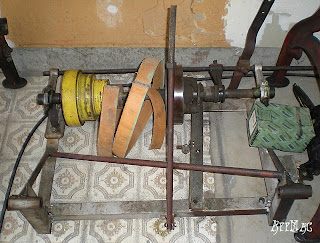 This is what the "farmer-ized" rack for the motor and the pulleys looked like when I brought it home. It's what they made when they "electrified" the lathe. It was made out of 1/4" thick angle iron, 5/8" solid rod, and water pipe - all stick welded together by I believe, Blind Mellon Jefferson. I gotta give them credit, it lasted for 86 years! But, it was a true POS. 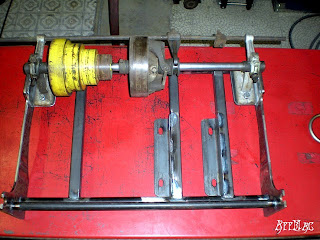 This is what the new rack for the motor and the pulleys loos like now. It doesn't look like it, but it's 3/4's the weight of the old rack, it's a lot more rigid, and fits in well with the "style" of the lathe. I had a guy stop by that does CNC work, and he asked if I had the end pieces cut with a waterjet or a laser, and I told him I cut them out with an oxy-acetylene torch, from a pattern I made out of posterboard, that I traced on the 1/4" plate with a soapstone. He wouldn't believe me.
See those "C" cuts on the end of the plates? That's where the pivot tubes go (see the above photo), to hang it on the back of the lathe. I've had those pivot tubes cut and they've been laying on my workbench for over 6 months! I just didn't want to drag that heavy fucker away from the wall and get it done. I finally got them welded on the day before I left for L.A. last weekend, and the rack in place. "The meeting of The Procrastinator's Club has been put off until next week......". 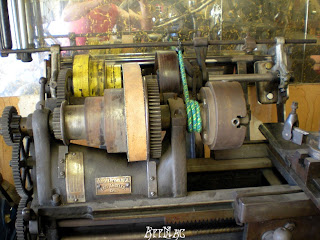 This is what it looks like (less the motor), mounted to the original pivot bar on the back of the lathe. Looks a little better than what they had, huh? The motor is fully adjustable now for belt tension, and the rack adjusts the tension for the drive belt. I'm going to have it powdercoated a dark maroon, to match the legs. Now that everything is in place, I can go down to Western Belting, and get new belts made for it. 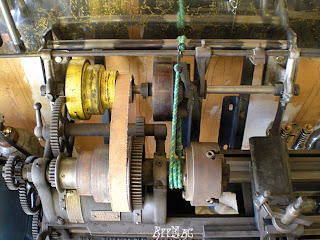 After I get the belts, I need to run the line from the main breaker box to the wall outlet, and get Chris the electrician over here, and have him do the wiring from there. Nice to have an electrician that rides!
Posted by Irish Rich at 11:43 PM 2 comments:

Timothy Barton is doing an ongoing series of books on metalshaping, and long-lost and modern tooling to accomplish the same. The series is called......Metalshaping (natch!) The Lost Sheet Metal Machines. If you're at all interested in sheetmetal forming and fabrication, I'm sure you'll find these books pretty interesting. Each book on his site has a table of contents you can view, too. You can check out his whole series, and his future DVD sets here:
http://www.autofuturist.org/ 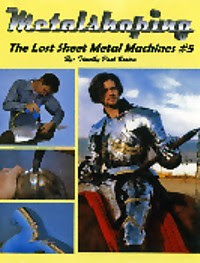 Books #1-4 are available now, and books #5-7 soon to hit the presses. Tim asked me if I would contribute to Chapter 12, in book #5 - Engine-Turning and Surface Brushing. I'm pretty stoked that Tim sought me out, and felt that what I had to offer was knowledgeable enough to be included in this chapter. I've never been asked to do something like this before, so I was pretty excited about the whole prospect.
Posted by Irish Rich at 11:56 AM No comments:

I've seen all the Loony Tunes/Merry Melodies cartoons a bazillion times, and they still make me laugh! I saw a documentary a long time ago, on the writers and animators that did the Loony Tunes/Merry Melodies cartoons for Warner Bros. They were located in a temporary building on a far-away corner of the WB lot. The WB tour guides were instructed to never take a lot tour anywhere near that building. Why? Can you imagine what the people on the tour would have thought, if they saw the writers acting out the parts of the cartoon characters in the parking lot in front of their building, as the animators sat with their illustration boards, capturing the action? 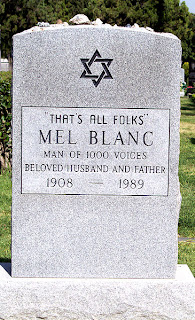 Mel Blanc's tombstone - the Hollywood Forever Memorial Park, Los Angeles, CA. The voice of 90% of the WB cartoon characters, and also the voice of Barney Rubble, Mr. Spacely, and countless other animated characters in shorts and commercials. Is this a cool tombstone, or what?
Posted by Irish Rich at 10:04 AM 1 comment:

Randy took his bike home a couple days ago, too. This was a bike that Randy owned, that he took apart 10 years ago, and it sat in his barn in that state until about a year or so ago. 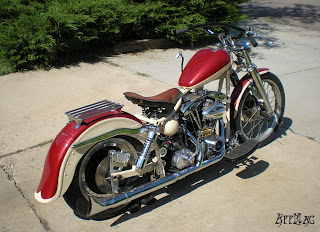 Randy got the bug to get it back on the road, so he had Dave at 2Wheelers rebuild the engine, and they sent him down to Dennis Goodson's shop after that, because Randy wanted the front downtubes stretched 2". Dennis was too busy, so he referred him to me. 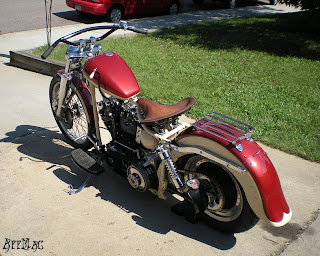 I stretched the downtubes 2" for him, added some sleeves to the downtubes and the lower tank bar, and raised the backbone up 1", because Randy wanted more of the rear rocker box visible. After that, Randy asked if I wanted to go ahead and put his other ideas into the build, so I took on the whole project. 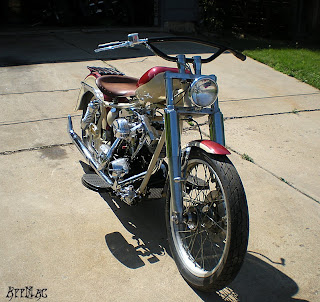 Randy wanted a 5 speed, and an open belt, the tractor seat, and the long rear fender. I did that for him, along with a Labriola foot clutch, relocating the gas tank filler, making the oil tank, the hand shifter, and locating the Softail battery under the transmission. 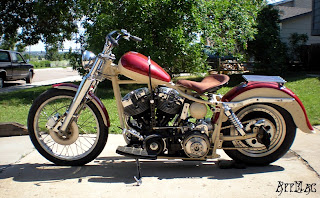 Along with the above, I added an internal throttle to the Paughco Hollywood bars, hid the oil filter behind the trans case, set up the Tech Cycle starter plate, and made the footboard mounts. Blast Tech handled the blasting, Taint Paint the powdercoating, Bitchin' Stichin' the leather seat redo, and Brian (formally of Alterior Motive) did the paint. I did the final assembly, and the hidden wiring, along with the electrical box mounted to the old coil mounts. The coil now mounts to the front of the trans plate, behind the belt drive.
Posted by Irish Rich at 11:47 PM 1 comment:

Elliot took the bike we did for him back home to Grand Island, Nebraska a week ago Saturday. He's taking the build on from here, for the paint, powdercoating, chrome and wiring. Not much wiring to do, it's magneto equipped.
I wasn't able to snap any photos of it the afternoon before it left, because when we were ready to shoot it, a big thunderstorm decided to let loose and hang around until dark. So, Elliot sent me this pic right before he tore it down. Not in the photo is the cobra-style seatpan I did for him, we'll see it when it's upholstered. Good luck Elliot, keep us posted on the progress! 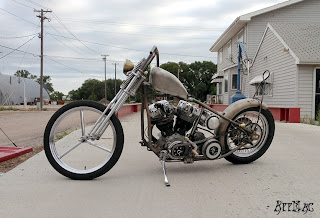 You better be there, too, or you'll have to wait an entire year for it again. My favorite motorcycle event in Denver, I've been to every one.
http://lovethychopper.blogspot.com/ 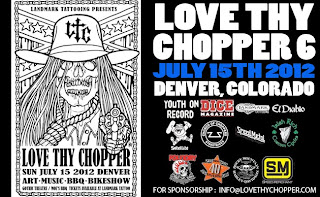 Posted by Irish Rich at 8:07 PM No comments:

We've cleared out a bunch of bikes and projects, and now we're back on Deb's rock n' roller, and pushing ahead with Lumpy's CFL simultaneously, and my single-loop CFL as we have the time, plus some other projects stuck in there here and there - like Tommy's rigid to a swingarm frame conversion, which we're now going to do the whole enchilada on. We'll bring you up to speed on Deb's framework/bike, which I had covered in past posts on here first..... 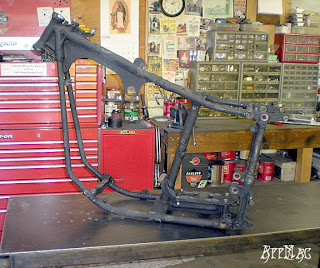 This is where we started from - a titled Arizona 4 speed frame, that we were originally just going to fit with an Evo powerplant. Things just kinda went a little further, haha! 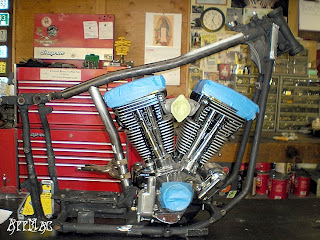 This was the trial fit with an S&S 96" motor, after the front section was tacked up before final welding. Plenty of room all around, it went in and out easily. We didn't even have to notch the seatpost for the rear exhaust pipe! 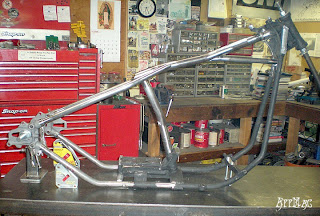 Here's where we finally wound up, after we hardtailed it, with an extra 1" overstock stretch added to the rear section. A nice, solid platform to build from. The S&S 113" motor fit like a glove, and no shimming was necessary. 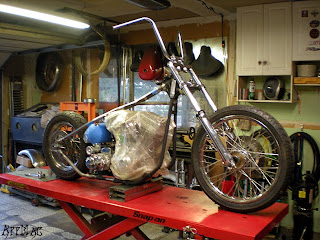 I think my digital camera is headed for the Big Techno-dump in the Sky....Here's where we left off tonight. Deb's bike is fast approaching roller status. Lots of long distance roadburner stuff here - S&S 113", Baker 6 in a 4, 5 qt. oiltank, Tech Cycles Indian Larry Series E-start and motorplate, 3" BDL with a 47/76 pulley tooth combo, and Alto clutch plates. We'll use the OEM Softail 4 piston caliper on the rear, and a Tokico 4 piston caliper hung with a Fab Kevin bracket on the front. If you're gonna GO, you need to Whoa! 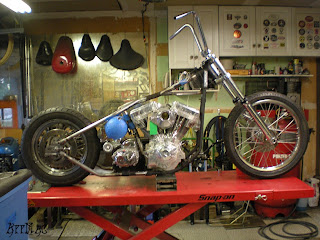 This'll be the profile when it's finished. Front axle and more parts will be here Friday. The stretch I added in the hardtail fit the stance perfect with the 2" stretch in the downtubes (done previously by somebody else), and works with the stock length FXSTC front end. Just imagine upswept fishtails, 5 gal. fatbob tanks/dash, med. height 5/8" sissy bar, gloss black frame, and Japanese Red sheetmetal. Was the framework worth it? You tell me.....
Posted by Irish Rich at 12:42 AM 5 comments: 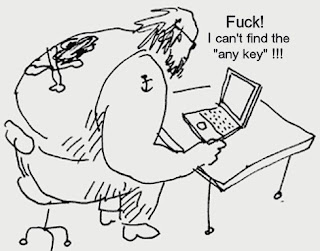 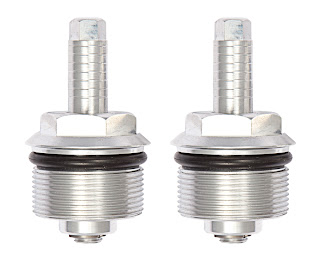 The Speed Merchant has manufactured our 39mm Fork Adjusters for speed and beauty.
CNC machined out of 6061 aluminum with precise craftsmanship, engineering and balance. With up to 7/8″ adjustment, you will be able to rule the streets or run the canyons.
Fits: 87-94 FXR, 91-05 FXDL and FXD, and 88-up XL models
MADE IN SOUTHERN CALIFORNIA, U.S.A.
For the full line of Speed Merchants products
http://thespeedmerchant.net/wordpress/
Posted by Irish Rich at 9:17 AM 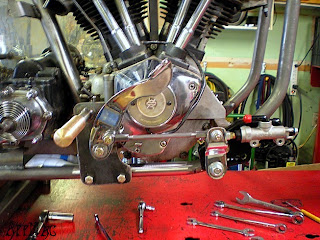 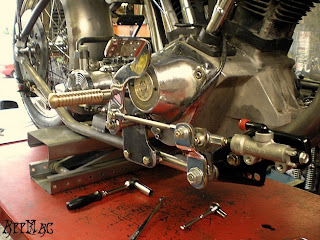