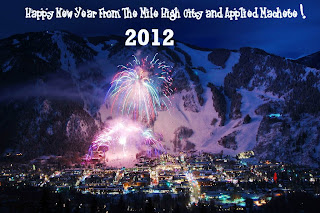 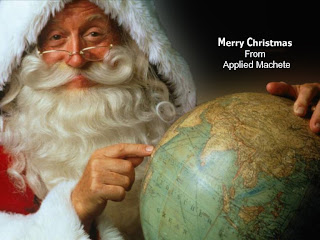 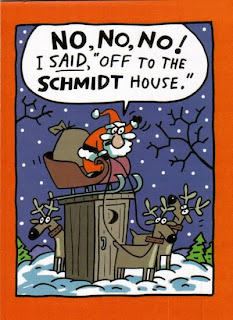 Tim Doherty gave me one of his Phantom Oil Filter kits to try out, at the Laughlin River Run about 11 years ago, when the kits were fairly new. I've never had a chance to do just that, until now.
Doherty Machine made some great products, the best known were their PowerVents for both crank and head breather Big Twins, the Power-Pak air filter kits, and their "Mist-Free" head breather conversions for Twin Cams.
Unfortunately, Tim passed away in March of this year, and Doherty Machine ran into some operational problems. It's my understanding that Trask Performance , in Phoenix, AZ acquired Doherty, and is supposed to be producing the old line of products. Whether the Phantom is available again I'm not sure, you'd have to give Trask a call. The old Doherty product distributors show it "unavailable". 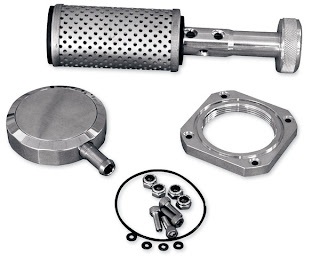 The Phantom Oil Filter was designed to be installed in place of the center fill cap on rigid frame 4 speed, and Softail 5 speed horseshoe-style tanks. But, it would mount on any oil tank - like the end of a round oil tank - that gave you a flat 2 1/2" x 2 1/2" surface to work with, and clearance for the filter length inside. The kit took the internal-style oil filter replacement cartridge used in Harley's ElectraGlide 4speed oil tanks, and is easily found.
You can see, Doherty changed the cap on the later kits, to a side feed for the return line, vs. my kit's threaded center feed location, and 1/8" NPT 90 degree elbow. 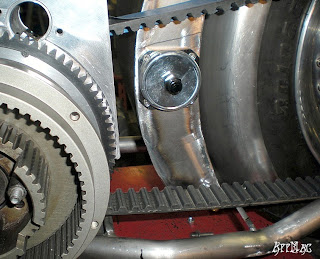 This is the location of my Phantom - LT. side of the tank, between the belt drive runs. When I was figuring out the width of my tank, I was sweating the dimensions to not only get clearance for my starter, but enough side surface for the filter mounting flange. I made it, with an 1/8" extra on each side of the flange - whew! Instead of the the original inlet spigot, I installed a 1/8" NPT male to -6 AN male fitting. Totally hidden oil filter! 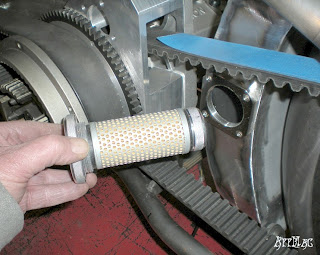 See how trick the Phantom was? You just remove the return line, unscrew the cap, and remove the filter for service. Hopefully, Trask will include this in the Doherty product line when they are up to speed. 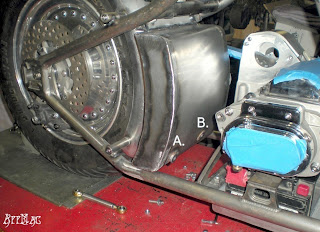 Here's where I'm at on my oil tank. The feed bung is A. in the photo, and the vent line goes into bung B., where there is an internal stand tube that bends over to the right to clear the filter cartridge, then up to about a 1/4" of the tank top. Darin from Bung King has my filler bung and screw-in cap on its way to me.......
Posted by Irish Rich at 9:55 AM 4 comments: 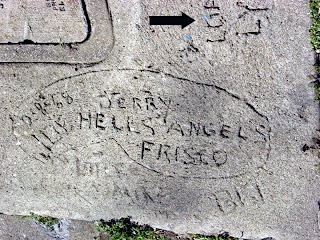 The photographer also pointed out that partly visable in the upper R/H corner (see my arrow) is the name Loaded Linda.

Bernal Heights is just below The Mission Dist. in San Francisco. Bachmann also stated that unfortunately, this strip of sidewalk was torn out and redone shortly after he photographed it in 2005.
Posted by Irish Rich at 11:11 AM No comments:

Always in the "Top 10" most viewed posts on Applied Machete are the one's that I did on the Psychedelic Love Temple, the subject of the David Mann Painting by the same name. Not a month goes by that I don't get an Email or two from somebody who partied there, lived there, or crashed there when they were passing through L.A. Some of the accounts I get are concise, clear recollections with dates, times, and names, others are disjointed random pieces (go figure, huh?).
I thought I'd share one Email I just got a couple days ago, from "lewis.kl1". Read on.....
I lived at 1039 S. Ardmore , from mid '67 till the last party, my room/home was the front balcony set of room's. If you came to the house, I'm the one who normally opened the door if it were closed, or I greeted you as you came up the front stairs. We knew when people came in because of the noise the gate made, the gate had a very unique sound. The trike in one of the Roth posters was Tankers, the Panhead was mine. It was a great time of brotherhood, every day was a party. 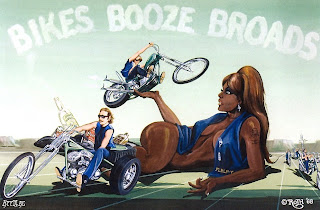 The painting that "lewis.kl1" referred to, containing his and Tanker's bikes. Everybody calls this painting Bikes, Booze, Broads, but the actual name of this is A Taste Of Honey. "lewis.kl1" didn't specifically say weather he was a member of the Barons MC or not, but Tanker was. Tanker's trike was also featured in the very first issue of Roth's Choppers Magazine - under the title Tanker's Love Machine.
Posted by Irish Rich at 10:30 AM No comments: 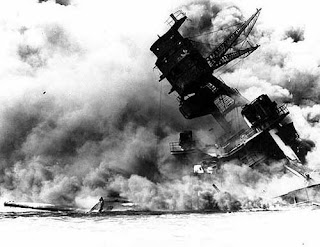 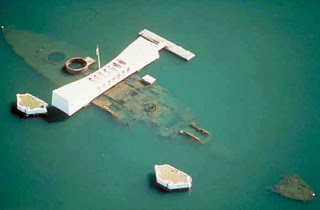 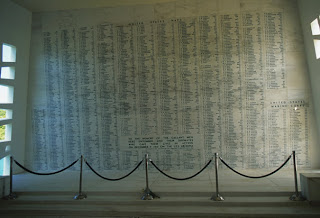 This guy is still an assclown. This guy would be an assclown if he was doing beanie propeller hats. Unfortunately he chose "motorcycles". So sad. 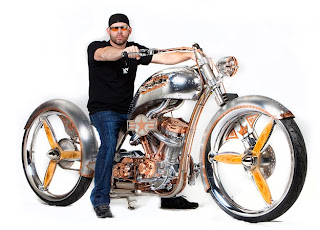 They call it FRISCO.....and, a little more for you.

I didn't want to mix these things in with the post below, but I found some interesting things about Chocolate George, and a REALLY interesting document on Hairy Henry Kot. First the Chocolate George items:
* Chocolate George owned a couple auto junk yards in San Francisco, one of which was called D&G A GoGo. The "G" was for George, and the "D" was for his younger brother and partner, Doug Sessions.
*George's original Angel name was "Junkyard George", because of his junk yards (not to be confused with "Junkie George", the HA that kicked Hunter S. Thompson's ass, he's a different Member), but on a run to Berdoo one time, George produced a quart of chocolate milk to drink to sooth his ulcers, and he was renamed "Chocolate George" from then on out. George had reoccurring stomach ulcer problems, and he drank the chocolate milk to calm them down. It was also an easy way for him to consume whiskey (which he spiked the milk with) without it upsetting his ulcers.
And, now for this obscure document I ran across on Hairy Henry Kot. It's the appeal ruling, dated June 1, 1959, on a 1957 arrest and conviction of Hairy Henry on a Possession Of Stolen Property charge. It involved Henry being found in possession of a stolen Pan engine with altered case numbers in a bike he owned/rode:
http://online.ceb.com/CalCases/CA2/171CA2d9.htm
Posted by Irish Rich at 11:46 PM No comments:

They call it FRISCO.....Chocolate George's funeral.

The famous Chocolate George's Funeral poster, and some on the events that occurred that produced this photograph. 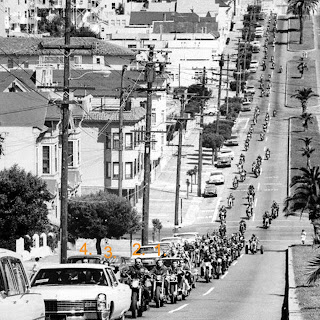 UPI/29 Aug 1967 San Francisco, California, USA... San Francisco Hells Angels-style funeral cortege dots a hilly street as upwards of 200 cyclists roared to the funeral party of one of their members - "Chocolate George". His real name was Charles G. Henricks (sic), a 34 year old Angel who was killed in an accident in San Francisco's Hippie Haight-Ashbury district. It was the kind of last run Chocolate George would have dug the most. The cycle parade into Golden Gate Park..beer and wine..women..and rock music. After all the din and dancing it was, perhaps, apropos that one of the music groups attending the send-off was the Grateful Dead...Image by Bob Campbell
The photograph of Chocolate George's funeral, that became an iconic (and much sought after today - an original 24" x 48" will run you at least $400.00) poster was taken by Bob Campbell, and it ran on pg. 4 of the SF Chronicle with an article on the funeral entitled The Gang Gathers. The photograph hit the wire services, and it was in most of the major papers across the country the next day. Why? Well, because the Angels, hippies, and Frisco were news, and not many people had seen a sight like this in their lives. The original poster was printed by The Print Mint, in SF.
On the afternoon of Aug. 24th, 1967 Chocolate George was riding down Haight St., and went to make a turn right by the Straight Theatre. He hooked the front wheel of his bike on the bumper of the car in front of him (I've heard said it was a '55 Chevy), which caused George to be thrown from his bike onto Haight St. , suffering a serious head injury. George was taken to the hospital, where he died that evening.
George's funeral was held on the next Monday morning, the 28th. The funeral procession actually wound its way down Haight St, past the site of George's accident, with the procession gunning their engines as they passed the Straight Theatre, in a last salute to George. The funeral procession then headed to Cypress Lawn Cemetery, where George was cremated, and his ashes later scattered over Twin Peaks - the 2nd highest peaks in SF, located almost in the geographic center of the city, offering almost a 360 degree view of SF.
After the funeral, everybody went to Golden Gate Park for George's wake, or Wail! as it was called on the posters announcing it. Almost all of the Haight community turned out, because George was a much loved fixture in The Haight. Several of the SF bands played that day, most notably Big Brother, and the Grateful Dead. The Angels supplied the beer, and the Diggers supplied the food. It was a good send-off, indeed.
Here's something for you about what you see in the photograph/poster. Obviously, you see the hearse carrying George's body, with the family car right behind it. Next, behind the family car, riding 3 abreast, is the Frisco Chapter (I noted Pete Knell as #1. in the photo). Riding directly behind the family car is Hairy Henry Kot (#2), next to him (#3) is an unidentified rider - some have told me it's Sonny Barger, but I don't think so. That guy is flying some pretty tall apes. And, to the far right (#4) is Doug Sessions, Chocolate George's younger brother.

And, last but definitely not least.....here's some super-rare 8mm footage below these last two paragraphs, of Chocolate George's funeral, including a brief interview with Hairy Henry, and the Grateful Dead playing at George's Wail! in Golden Gate Park afterwards. If you look, you'll see Galloping Gooses, Satans Slaves, Straight Satans, and a few other clubs that came that day to pay their respects to Chocolate George, and his Club. Don't ask how I run across this stuff!
You know what's always bugged me about the original poster (which I had by the way, but disappeared on one of my moves, along with the first 3 issues of Easyriders, but I replaced those, never the poster)???? I still can't figure out why the Print Mint found it necessary to print the poster with the family's funeral car colored in bright florescent pink, when the rest of the poster is in B&W, save for the words at the top Chocolate George's Funeral, which are in brown and gold. I've never been able to find out if or what that meant. Anybody know?
Posted by Irish Rich at 9:09 PM 5 comments: