YOU NEED TO BUY THIS BOOK!

Mark Kawakami - killer photographer, dedicated family man, all around great guy, and a good friend. You need this book in your collection...... 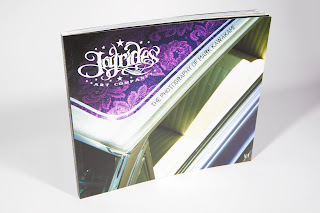 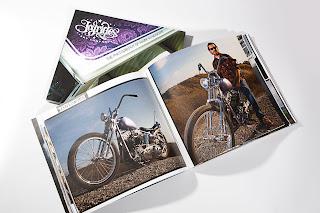 Posted by Irish Rich at 8:32 PM No comments:

I get dozens of Emails every month alerting me to the "latest & the greatest" new products for bad-ass bikers. I guess this is so I can get in on the ground floor before the mad rush takes place to buy this stuff.

Most of the time I just delete them, but I thought maybe some of you would like to jump on this new helmet before they're all instantly sold out. It's the SKULL DIABLO, but in my excitement, I don't remember the manufacturer. It'll probably be in the new issue of The Horse, though...... 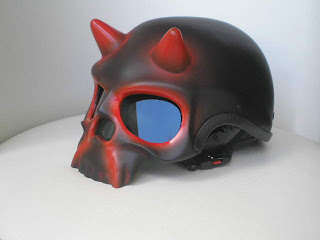 Just think how awesome you'd look if you wore this in combination with your Solid State Covers "logsplitter" face guard? And, hey....I'm all for any new product that makes it even harder to see when you're riding your motorcycle!
Posted by Irish Rich at 8:36 PM 1 comment:

I haven't posted much on the blog for awhile, but things have been jumping here - just ask Part-timer Steve! Work hasn't stopped coming in, and we've been concentrating on getting Wade's rigified TC-B wrapped up, along with trying to get ahead here on the other projects before I split for the Left Coast next weekend. More on that further down this post....
Anyways, I thought you'd like to see Wade's 'naked" frame fresh from the powdercoaters last Thursday, before I assemble and wire it up. The frame, now that it's completed, looks deceptively easy to do, and that's the way it's supposed to look when it's finished. All in all, adding the rigid section to his stock TC Softail frame front section was a lot of work and head scratching, but I think it came out killer for the effort. 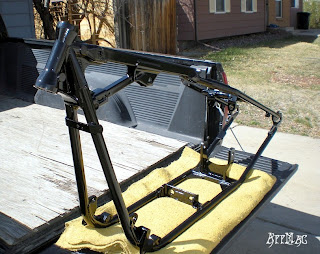 I worked with a new blasting company - Blast Tech, in Englewood, CO - this time around, and Gary's guys put a fantastic finish on the frame before Roger at ' Taint Paint in Colo. Springs did one of his excellent glassy black powdercoats on it. Zero peel on the finish, just as it should be. Blast Tech will be getting all my blasting business from now on, and Roger's powdercoating has always been top notch, and on time to boot. 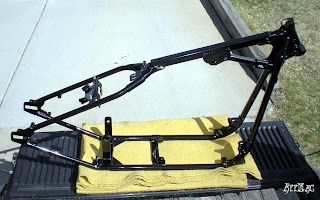 I'll post photos of the completed bike before I load it up to take it out to Wade in Flagstaff next Thursday. After I drop it off there, Friday it's on to L.A. to pick up a basket case '79 Shovel, that'll supply me with the engine for my Invited Builders Bike for Born Free III. The basket has a solid 96" stroker with a Morris M5 magneto, and a lot of parts to sell off once I get back here, including a titled '79 swingarm frame, a drum glide front end, and a Kraft Tech stock dimension rigid frame with a good MSO.

I'll be making my home base at T-rod's place in Costa Mesa while I'm out there. Can't wait to see the sidehack in person! On Saturday the 16th, I'll also be hitting Kutty's Hippy Killer Hoedown in Winchester for the day, so if you see me there, come up and say hello! 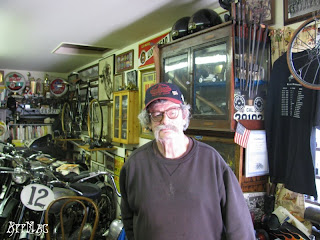 Frank Kaisler, Four Aces Wes, Part-timer Steve and I a couple years ago visited with Mike Parti at his home and shop. Mike was kind enough to let Steve film while we talked. Here's part of that footage. You need to see this.....
http://www.youtube.com/watch?v=x4dAmDPxpQ4
Posted by Irish Rich at 8:18 AM 4 comments: