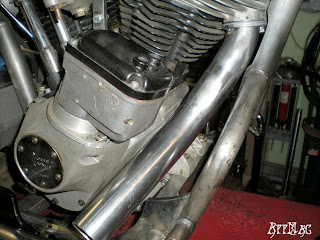 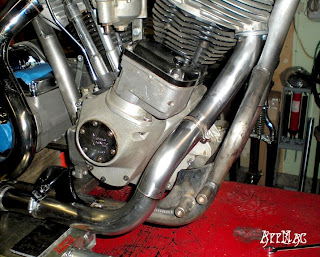 ....that went into a 45 degree bend, which mated to a 70 degree bend, which was 6" short of the merge pipes....are you with me so far? I needed to add a straight section to the end of the 70 degree bend to complete the front pipe. Doesn't look like it, but careful cutting, fitting, cleaning, and tacking these bends took well over 3 hours. I'm not plating or wrapping this system, this is getting a black porcelain (not ceramic) coating. I had to make the mating cuts tighter than a gnat's ass.....(Gnat's note: "That's pretty tight!") 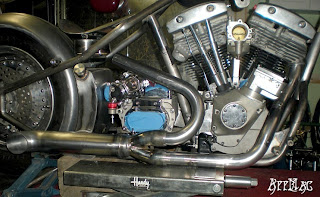 Everything was going along great, untill bam...screaching halt. Why? Well, I was sure I had a couple extra 90 degree bends left over from the last set of pipes I did for a client, so I didn't order any additional 90's for this setup. Turned out they were 70's. Guess what I'll be ordering tomorrow? That blows...
Posted by Irish Rich at 12:37 AM 2 comments: 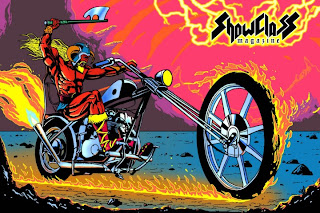 A couple months ago, Show Class magazine asked if I'd like to do an interview for their next issue. They'd Email me a series of questions, and I'd Email those back with my replies, and then I'd get a new group of questions to reply to.
They assembled the interview, and it's available in its entirety in the new issue (issue #5), which will be available to ship around (I think) the 14th of February. 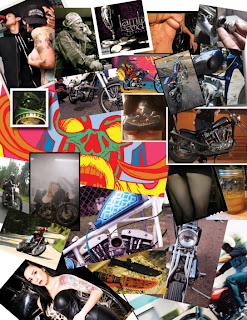 If you'd like to pre-order issue #5, you can do it here:
http://www.showclassmag.com/
I'd like to thank Show Class for the opportunity to do this, it was something I don't get a chance at very often. It's a cool "small sized" magazine, and I gotta give the guys there at SC a lot of credit for launching a publication like this. The inde magazine biz isn't an easy game to crack into, so my hats off to them for the effort. Thanks guys!
Posted by Irish Rich at 9:03 AM No comments: 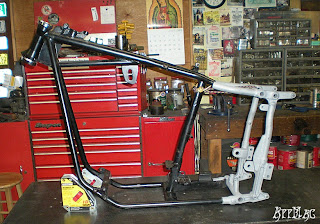 Real, real happy with the initial fitup on Tommy's frame! When the top tubes in the seat area get "realigned", it'll be pretty stock-looking, which is what Tommy wanted. The rear section needs to go a little more "vertical" , and towards the backbone still. This will have people scratching their heads. 4 speed swingarm, Evo powerplant, 5 speed transmission, a stainless Pan neck (Tommy's numbers are on his front motor mount), and stainless sidecar loop forgings to match. They won't know what came from where. 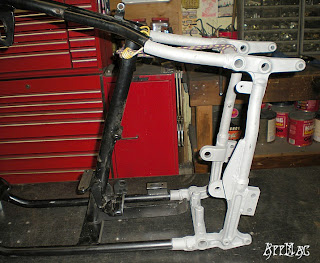 Almost, but not quite. Approximately 3/8" more needs to come off all the splice points, and 3 of the trans plate bolt holes will align, and the trans plate will bolt in place. See, somebody decided to weld in the 5 speed plate, and they cut the trans mount on the seatpost down to match the plate (?) I'll have to build that back out to get the Lt. front trans plate bolt hole back again. Oy vey!
Posted by Irish Rich at 12:43 AM 1 comment:

.....is in Manhatten, giving an address to the UN General Assembly. On his way back to his hotel, he decides to get something to eat, not having had anything all day. He passes a pizza parlor, and decides to go in. As he enters, the counterman says "Can I givva you somma help today?" "Yes you can..." says the Dalai Lama, "Can you make me one with everything?" Think about it......... 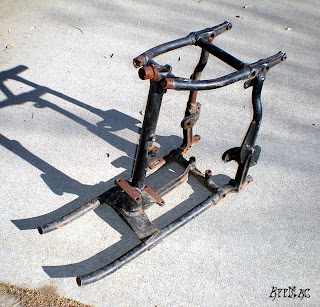 Usually, I'm cutting off the swing arm section, and putting on a hardtail. This time around, I'm cutting off a hardtail, and putting on a swing arm section. Tommy's plans for me, in addition to the swing arm section, are to add a stainless OEM-style neck forging and stainless sidecar forgings from John at Hardtail Choppers, then mix in dual 16" wheels, 5 gal. fatbobs, a short glide front end, and a hinged rear fender, with the "flip-up" section removed. Then, we're looking at an all black paintjob, a little pinstriping, along with as many accessories as we can powdercoat in gloss, semi-gloss, and wrinkle black for contrasts.
Also, check out what a killer job Blast Tech, in Englewood CO. did on that nasty rear section. Total professional work. 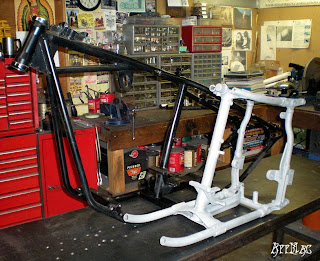 Looks like the best splice for the top rails will be at point A. ,right behind the seatpost crossforging, then with a little tweaking, and a little judicious heat applied to the rails, they should line up on both sections just fine for the splice. 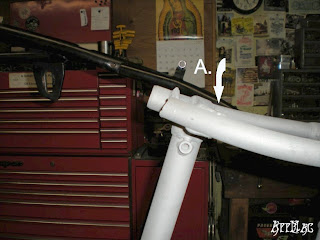 The splice point on the bottom rails will be a piece of cake, right at point B. ,just behind the 5th trans mount. We'll use an offset trans plate that adapts the 4 speed frame to a 5 speed transmission to line everything up on the primary drive, and allow Tommy to keep his 5 speed. What's that you say....5 speeds don't fit in 4 speed swingarm frames, because of the L/H swingarm pivot? I've done them before, so you'll see how it's done. 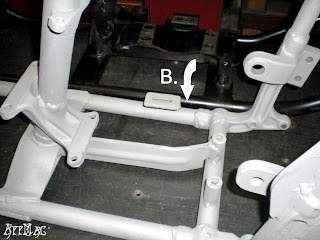 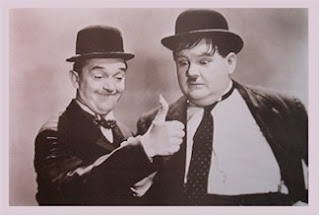 Thank you everyone who follows my blog, leaves comments below my posts (except you fucking spammers), and the people who Email me and add more info on one of my post subjects, that I didn't know about. I've gained a lot of knowledge doing this blog, and I hope you've taken away a little from it as well.
Posted by Irish Rich at 7:54 PM 1 comment: 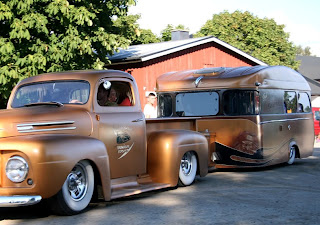 Photos from Supreme Seventies, and Go Away Garage blogs, respectively. 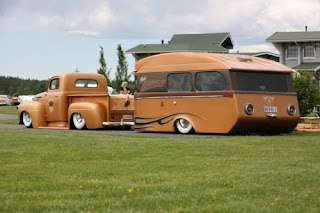 Posted by Irish Rich at 9:27 PM No comments: 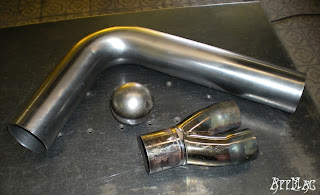 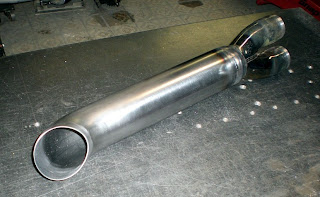 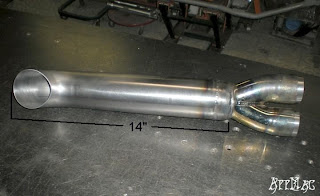 It's 14" long on the "muffler" section, although I doubt it'll muffle anything. Now, if Paughco will just ship my Shovelhead BYOP pipe kit, we can finish this exhaust system. I think the whole motorcycle parts world is on backorder........
Posted by Irish Rich at 9:32 PM 9 comments:

Triskaidekaphobia, and enjoy your Friday The 13th.... 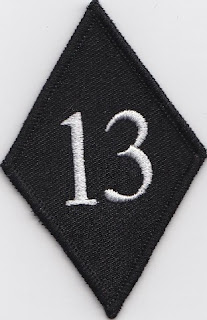 Triskaidekaphobia ( noun ) : From the Greek tris meaning 3, kai meaning and, deka meaning 10, and phobia, meaninbg fear, or morbid fear. An unusual fear of the number 13, and anything related to the number 13.
Posted by Irish Rich at 10:02 AM 1 comment:

Thank ChopperDave for the inspiration.......

A few days ago on his blog, ChopperDave posted up a couple of David Mann's paintings that were part of the RM Auction for the Brucker Bros., held at the Peterson Automotive Museum on May 13, 2006. The auction was titled The Originators - Ed "Big Daddy" Roth, Von Dutch, Robt. Williams - The Brucker Collection.
As part of the auction, the Bruckers put up for bid the entire collection of original David Mann paintings that Mann had done for Ed Roth, which in turn Roth turned into his well-known series of chopper posters.The Bruckers acquired the painting from Roth when he went to work in the Brucker's Cars Of The Stars, and Planes Of Fame (later, known as Movie World) museum from '70-'75, in Buena Park, CA.
There were a total of 17 Mann paintings that Roth turned into posters over the run, and the Bruckers offered up 16 of those - missing from the collection/auction (previous sale?) was the Outlaw Motorcycle Parade-Springfield Il. painting. In addition, the Bruckers offered the painting that Mann had done in '67 for Roth's catalog cover (the full painting wrapped around the cover), and 2 paintings Mann did for Roth that Big Daddy never used for posters - Dade County, and Ride Together-Die Together. In ChopperDave's blog post, he was bemoaning the fact that he didn't have a clear shot of the Ride Together-Die Together painting to post, so I dug one up for him, and you can see it below. In every one of the paintings Mann did for Roth, there is a hidden "Dave Mann" signature on each one of them. This painting has Mann's signature hidden below the gas tank, on the backbone - look hard, and you can see it. 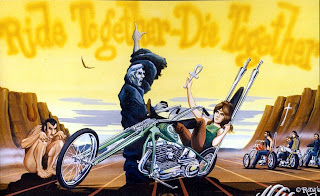 I made a comment on ChopperDave's blog that the green bike in the center of RT-DT was based on a bike that was built by a friend of David Mann's named Sonny Rogers, from Kansas City, MO. Sonny's bike was also featured in the August '69 issue of Roth's Choppers Magazine, with the words and photos coming from David Mann himself. I scanned in the feature for you here, to go along with the painting. 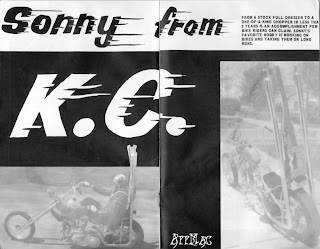 You'll have to forgive the quality of the scans, and anybody who owns any of the Roth Choppers Magazines will tell you, the original printings were "less than stellar". The layouts were sometimes crooked (as on the 1st, and 2nd pages), the mass of black on the pages is splotchy, photo reproduction varied with each shot, and in this issue, the text is partially cut off from the page when the printed pages were cropped (page 3). Plus, this magazine is a little more than 43 years old to boot! But hey, it was a first of its kind, so we can cut ol' Big Daddy Ed some slack, right? 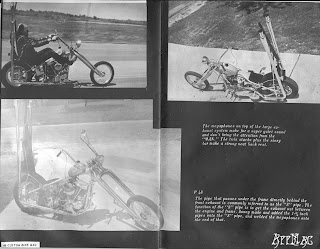 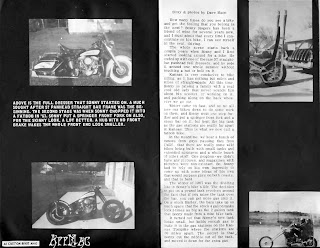 You know, a "Little Bird", that lives in Burbank once told me he was up at the Brucker Ranch years ago, and in the basement below one of the buildings up there, along with a lot of the other stuff (read Roth and Von Dutch artifacts) that went to the RM auction, were all of the Mann poster paintings hanging down from the upper floor joists. He told me that Brucker offered him the paintings at about 1/6-1/8 what they went for at the RM auction, but finances prevented him from pulling the trigger on them. "Such is life....." . 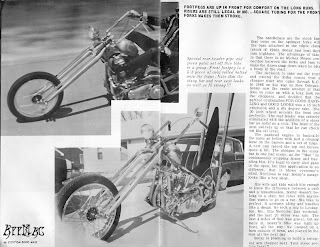 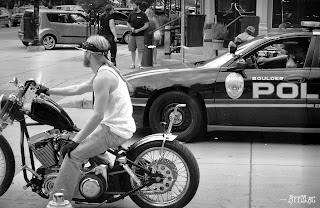 Posted by Irish Rich at 6:21 PM No comments: