I lost a faithful companion and friend last night. My German Shepard, Star, died in her sleep. She was 10 years old. You don't have to read any further if you don't wish to, I'll understand. This is mainly for me, and for Star. 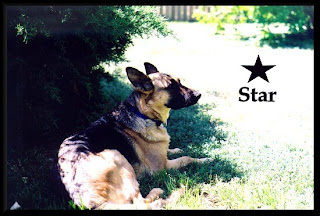 We got Star from a German Shepard Rescue Service when she was about a year-and-a-half old. As near as they could tell, she had escaped from a "puppy mill", and was carrying a littler of pups. She had been hit by a car, and they had to spay her to save her life, and she lost the pups. When we adopted her, she was a scrawny 40-odd lbs., had no muscle tone, and she had not-so-good hips. But, it was love at first sight when we went to pick her up. We named her "Star", because of the diamond shaped patch on her forehead


When we got Star home, she behaved like she had never seen the inside of a house in her life. We worked with her, built up her weight, exercised her, and took her to dog training classes twice a week. We took her up to a very muscular 85 lbs., and back into shape again. About 5 years ago, Star's hips were giving her some real problems, especially her right. Even though it cost a fortune (but, what are you going to do?), we had Star's right hip replaced, only to have it fail, and she would go through another replacement surgery a month later. She came back strong after her second surgery, and was up and back to her duties pretty dam quick. To say she had a lot of heart, and a lot of guts to survive all she did in her life is an understatement.

Star was a loving companion, and a fierce protector. She would have charged straight through Hell without hesitation if she thought one of us, or her "pup" (our other younger German Shepard, Jet) was in danger. When I left to go on the road someplace, I never worried for Laura's safety when I was gone. Between Star, and Jet, there was no way anybody was getting in this house without getting fucked up.

Yesterday Star seemed to be her usual self, no different than other days. She and Jet spent the day the way they usually did, and she seemed fine when I put them in their crates last night. This morning, I went to let them out of their crates, letting Star out first as I always did, because she would get pissed if Jet came out first. Star didn't come out this time. I knew before I touched her, she was gone. Jet came over, licked Star's head a couple times, and I think she knew too. I like to think that I'm a tough guy....but I just sat there and cried, yeah I did.

We wrapped Star up in one of her blankets, and drove her over to the vet's this morning, so she can be cremated on Monday. I'll put her under the apple tree in the back yard, the one she's laying under in the photo above. Jet's been wandering around all day looking for her "mom", and I feel pretty sad for Jet, too.

Like I said, this was mainly for me, and for Star. I'm pretty sad she had to leave so soon, and we're all going to miss Star a lot. I just wanted to give Star the tribute she deserved. Goodbye, faithful friend.....
Posted by Irish Rich at 11:26 AM 19 comments:

Zach's sissy bar is pretty much finished - save for the mounting lugs for his fender. Part-timer Steve thought we should give it a little bend at the top, and I agreed. I also added a 1/2 turn twist to the crossbrace before I welded that in. Maybe people will notice it, maybe not. I think Zach'll be happy with the results. 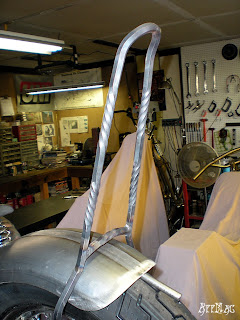 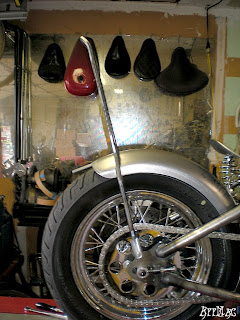 Like I've said, I don't use jigs, don't use outlines drawn on the shop floor, welding rod patterns, etc - just a centerline mark before I bend the material in half, and I use a few well-placed measurements and soapstone marks to get my bends in the legs to fit the fender and frame dimensions after that. Plus, a few tricks I've passed on to Steve about bending and forming sissy bars, but he still can't snatch the pebbles from my hand - "Hit me with the broom, Grasshopper......". His time will come.

Started the 1/2" hex sissy bar for Zach's rigid '04 Sporty tonight, the bar will be 30" tall in total. One side of the bar twists clockwise, the other side counter-clockwise. You think this is easy to do, and keep the bar straight on both sides? By yourself? HA! 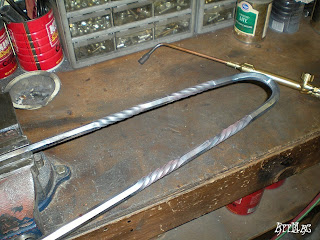 From the Emails I got on the previous post on Micah McCloskey's Indian Chief, there is a lot of intrest in the bike itself. I had a bunch of mail asking for additional pictures of it, so here everybody, this should satisfy you - enjoy! 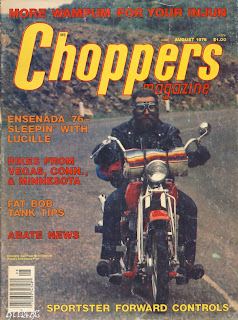 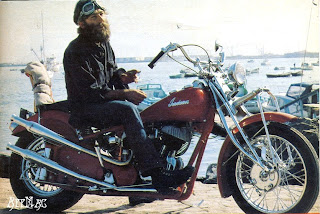 Micah's feature in the August '76 issue of Choppers Magazine. From the cover, can you tell that I read this magazine A LOT? Painted in solid "Indian Red". The cover was shot on the road, headed down to Ensenada, Mexico, and the 2nd shot I believe was in Ensenada itself. 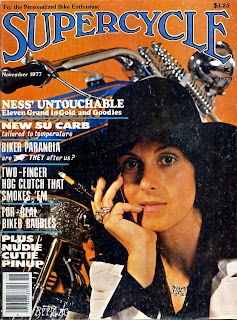 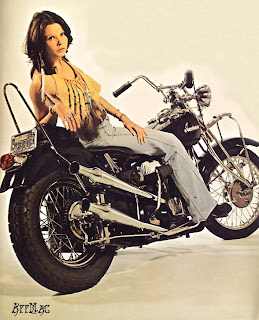 The Chief, from Supercycle, November '77, in its black livery. 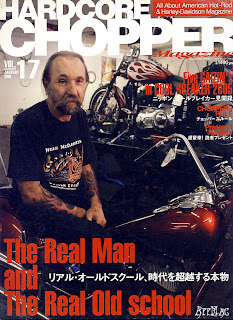 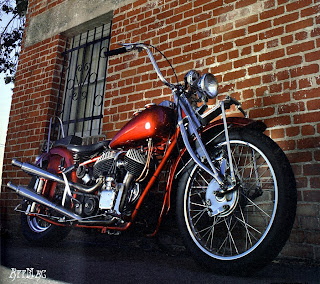 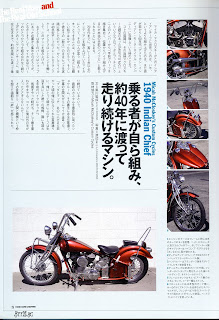 Micah's Chief, as it appeared in the Jan. 2006 issue of Hardcore Choppers Japan, with Micah on the cover. Candy red this time around. 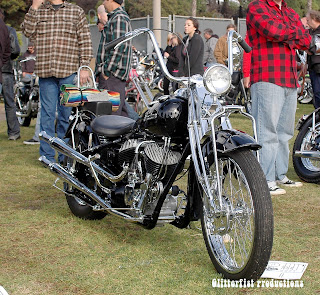 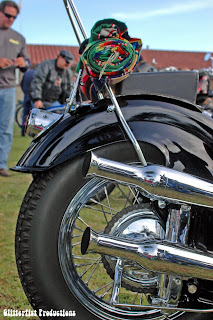 Photo courtesy Kristina Pamias/Glitterfist Production
A couple photos from the David Mann Chopperfest, Dec. 2010, taken by Kristina when we coverd the Event for The Horse magazine. Back in black again, and it's still black today. 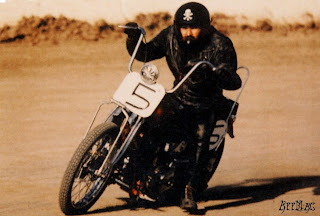 And, to finish this off, here's Micah barrel racing the Chief at an Easyriders Rodeo - right off the street.... apehangers and all. GO MICAH!
Posted by Irish Rich at 2:46 PM 1 comment:

When I sit down to take my lunch break, I used to watch re-runs of Emergency! and The Rockford Files. They've taken off Emergency!, but I can still catch ol' Jim Rockford (played by James Garner) on the tube. The Rockford Files used to be one of my favorite Friday night TV shows in the '70's, and it lasted for 6 seasons. Today, I saw an episode from '79 that I'd never seen before........ 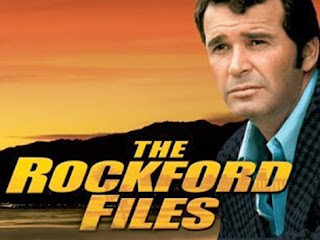 Today's episode was called Return Of The Black Shadow. The basic story line is Jim Rockford takes his buddy's (John Cooper, or "Coop", played by Bo Hopkins) sister Gail out for a date, only to encounter a pack of 1%ers at a gas station. The name of the club is The Rattlers (funny, because the real club The L.A. Rattlers was a very well-known black MC). As per Hollywood, the Rattlers stomp the stuffings out of Rockford, and "pull a train" on poor Gail. As a result, Gail winds up in the Mental Ward of L.A. General, and Rockford is laid up in the hospital with cuts, contusions, and broken ribs.

So, Coop decides to avenge not only his sister's honor, but also to get in a few licks for Rockford as well. See, Coop has a "club" past himself, with a club that was called The Black Shadows, so he gets his old chopper out, and sets out to infiltrate the Rattlers.

Now, as Coop rolls his bike out, I immediately recognize the bike - it's Micah McCloskey's Indian Chief! Turns out that Micah acted as a technical advisor and mechanic for this episode, and his bike was used as Coop's old ride. Now, you never clearly see Bo Hopkins riding the Chief, he evidently rode another bike in the pack riding shots. But, there are some nice, clear shots of the bike with Hopkins on/around it throughout the episode.

Also included in the cast as members of the Rattlers are perennial biker bit part players Mickey Jones (also one-time drummer for the New Christy Minstrels, Trini Lopez, Bob Dylan, and Kenny Rogers and The 1st Edition, and a spokesman for Panzer Motorcycles later on), and Dennis Burkley, best known for his role as Dozer, in Mask. I'm surprised Dan Haggardy wasn't in there someplace! And, I swear that I saw Rip Rose as part of the Rattlers, I'm gonna have to ask Kristina if she remembers her dad doing anything like that. 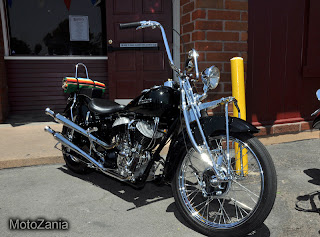 Micah McCloskey's iconic and well-ridden Indian Chief, the one that appeared in The Rockford Files episode. Micah has owned, ridden, and raced this Chief since the early '70's. This photo was taken at Wink Eller's benefit, in Orange, CA on June 26th of this year - the day after Born Free. I had an extremely cool talk with Micah at the event, as well as Joe Hurst. This bike has had numerous features over the years in magazines like the old Bob Bitchin's Biker, Choppers, Supercycle, and even Hardcore Choppers Japan in '06.

I couldn't find an online source for the Return Of The Black Shadow, but I see it's available on Netflix. It's Season 5, Episode #18 - originally aired on 2/17/79. Also, while you're at it, stop by Micah's website, and you can read his whole biography on there. I think you'll appreciate the young Micah's encounter with Von Dutch, during the time when Dutch was up in Calabasas:
http://www.micahscustomcycles.com/
Posted by Irish Rich at 11:29 PM 5 comments:

I saw this listing about a month ago on some San Francisco site. The house at 719 Ashbury St, in the Haight/Ashbury is for sale. It doesn't mention this in the realitor listing, but the other site said it used to be a "Hells Angels hangout..." during the Summer of Love. I do know that it's right down the street from the old Grateful Dead house, at 710 Ashbury.

I don't think this was the house Pete Knell (then President of the Frisco Charter) lived in, I think that was over on Geary, with Pete in the bottom half, and Billy Batman & the Bat Family collective on the top half - but, I could be wrong. If I am, please somebody correct me. 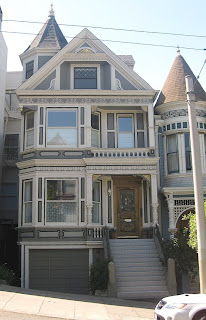