Keith "Bandit" Ball doesn't need an introduction, but for all that don't know, Keith was the long-time editor of Easyriders magazine during their heydays. Keith actually was editor twice, leaving for a short while (one of his long-term replacements was Frank Kaisler), then returning, and then having enough of the "corporate" direction of the magazine, leaving again.

Keith cashed in his chips with Paisano Publishing, and shortly thereafter, started Bikernet.com, one of the very first early Harley-oriented websites on the Internet. Bikernet is one of the biggest sites on the 'net now, and most certainly one of the longest surviving ones as well. 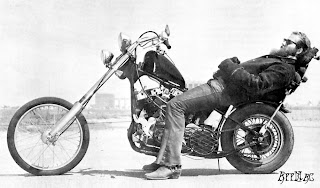 Here's Keith Ball in his first feature article in the Aug. '72 issue of Easyriders. Bandit wasn't part of the staff yet, but he was "growing" on them, so to speak. Keith said that everybody around him used to complain about the looks of his greasy, dirty, ratty '66 Shovel in a '55 wishbone frame, so he decided to take it apart and go "whole hog" on a new rebuild, and when he was finished......... 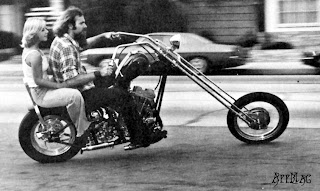 ........ wound up with this (and the girl, I guess!), in the Feb. '75 issue of Easyriders. By now, Keith was an Associate Editor for the magazine. Hey, if you can't blow your own horn, who will? Just kidding, Keith - Easyriders always showed the staff's bikes from time to time over the early years, to show the readers that they were exactly who they said they were. 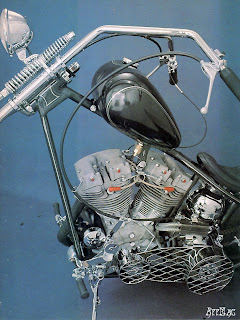 Here's a great color shot of the '66 Shovelhead, punched out to 86" (the tech sheet has it misprinted at 76"). The motor was given a sandblasted finish, and you can see the original beltguard that Bandit made, that took a dip in the plater's tank. Check out the modified rocker clutch pedal that is now doing shifter duties. Also note the early H.E.S. brass petcock, and Caddy power steering cooler, adapted for a oil cooler.

What I really want you to look at, is the oil tank itself. It's fabbed out of a highway construction smudge pot. Before blinking light barriers, the Highway Depts. used to use these pots, filled with kerosene and lit, to mark road construction areas at night. A crew would come and set them out, light the wicks, then come by in the morning, and pick them up again.

I was visiting Keith at the "Bikernet World Headquarters" last Oct., and we were standing in the courtyard next to the building, waiting for dinnertime. I happened to look over, and on a table were a bunch of those old smudge pots. I asked Bandit "Hey, Keith, what are you doing, making oil tanks?". Bandit said "What?......oh yeah, you remembered!". We got a laugh out of that.

A sidenote here: When we were kids, we used to wait for the night crews to put out and light the smudge pots. Because they burned kerosene, they were dirty as hell, and they got HOT while they burned.

We used to get old work gloves on, and grab those burning pots, and hurl them down the street like bowling balls. After the first few tumbles, the lid would come off, and there'd be a burning trail behind them as they careened down the street - usually into some body's lawn or garden. Then, we'd run like hell! Yeah, we got caught a couple times....... 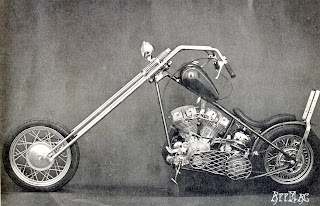 L/H shot shows how far out the 25 over Denvers springer reaches out to connect to the 19" drum Sporty wheel. Frame was an Action Choppers 1" tubed, 40 degree, 4 1/2" stretch. Bike looks big, but with Keith on it, it looked just right.

Another sidenote here: Up until a couple years ago, Negotiable Tim had his shop (Negotiable Parts, natch!) located in the original Action Choppers building, in Riverside, CA. The huge Action Choppers wall mural inside the building was still in pretty good shape, too. 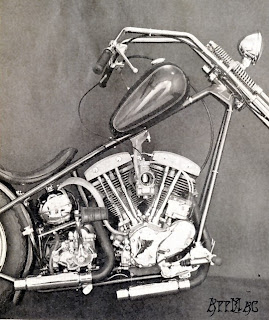 Here's a good shot of the Denvers pullbacks (that plugged into the rear legs), 38mm roundslide Mikuni, Bomar-built magneto, MCM shorty muffs, cobra seat, and the chromed smudge pot oil tank. The paint was all charcoal-colored rattlecan lacquer, with hand-painted pinstripes, but it looked pretty professional overall.
Posted by Irish Rich at 9:40 PM

In this new time, with flash in the pants bikers..aka "bloggers" Keith has always been a little inspiration. As to just being about enjoying motorcycles, period! and being a super nice guy.. nice Rich..

p.s. when yer down, you never say hi..SFFS

Mark, Seems when I come to town,. I have things/business I need to get done, and never enough time to do it all in.

Only one trip this year was for me, and that was the July 4th party. Plus, every time I get to town, everybody has plans and things to do already, and we never seem to hook up.

I'll make it a point of calling you next time I get in. You know you're one of my favorite people, that goes without saying. I'll even take you over to The Interlude, haha!

Keith's a good guy and still uses some interesting pieces on his builds.

I fondly remember those smudge pots. I was really fascinated by them as a kid. Guess it was the pyro in me. I hadn't thought of them in years until I spotted some at Keith's.

We ought to go over there sometime, and I bet after a few cocktails, we could talk Keith into filling them up, and we could hurl them down Harry Bridges Bvld.

bandit has been very cool to me. i started emailing him drunken messages last may and now i'm his editor on bikernetmetric.com. he's smart, busy as hell, has a great sense of humor, and still takes chances. i like him a lot and am honored to know him in the small way i do.