I've missed the last couple Mondays with my series on Von Dutch, so I thought I'd do a little makeup for everyone. The following photos were part of the March, '65 issue of Modern Cycle, contained in an article intitled "What Ever Happened To Von Dutch?" 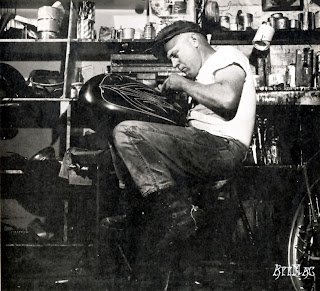 Von Dutch striping away. The article stated that Modern Cycle had found out where Dutch was "....hiding out, in a Southern California cycle shop", and didn't give the shop's location. In reality, it was the back room of Bud Ekins' shop in the San Fernando Valley. 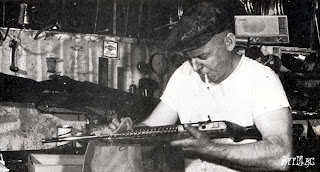 Check the M-1 Dutch is polishing up, that he's sporterized. 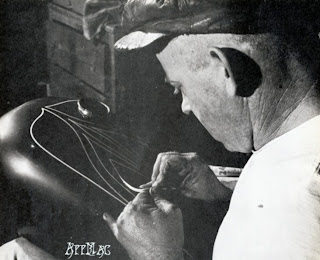 Von Dutch still striping. Notice Dutch's "double pinky down" style of pulling his lines. The article's author said Dutch continued to stripe and talk without missing a beat all during the interview - and I have no doubts that he did.
Posted by Irish Rich at 4:36 PM