It's been a busy week here. I left last Friday morning for Chicago, to attend the Wicked Wheels Weekend, at which I had one of the best times at an event I've ever had. Phil and Lynn Hoffman, Shakedown Ray, and the whole gang put on a first class show, and a good time was had by all - you should have gone, my friend. I even got the "Key To The City" from the Mayor of Sandwich himself! In addition to the show itself, they also screened the Harbortown Bobber on Sat. night for everybody.

Met a lot of people I knew, met some new people, and put faces to names I only knew on the internet. Hooked up with Opie from S&S Cycle, Fat Bob and Bird from Rockford, Josh Kurpius, Mitch Cotie, Bacon, Warren, and the rest of the guys from Milwaukee. Had plenty of time to spend with everybody, and dug that greatly. 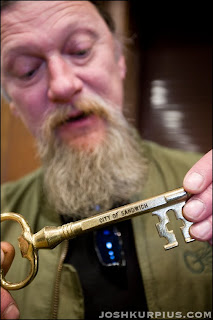 The key to the City of Sandwich, IL
Photo courtesy of Josh Kurpius

Josh Kurpius has some great photographs of the event over on his blog Kemosabe And The Lodge, so take a trip over there and check them out:
http://kemosabeandthelodge.blogspot.com/
Also, when I got back home, my computer decided it was sick, and it demanded medical attention. I couldn't get anything done, and had to call in a pro to undo whatever those guys undo. So, be patient, I'm stacked up on Emails, and I'm almost caught up. Plus, I'm busy with projects here, and I'll post them up as I go along, including another set of narrowed fatbob tanks for Guy @ Greasy Kulture, and a complete disassembly of an Evo Sporty for a Led Sleds hardtail kit.
Posted by Irish Rich at 2:18 PM