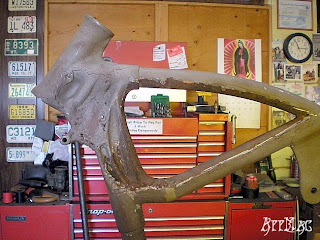 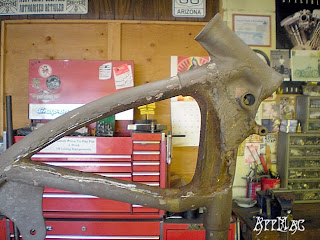 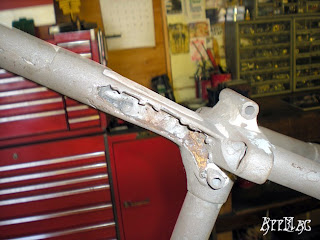 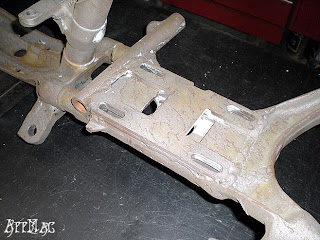 Well, this frame doesn't get any better. I got those gross sidepanels cut off, and the fillers cut off the seat forging area....not good. You can see, there's really no saving that neck forging. Near as I can figure, it measures like it was raked out to about 38 degrees, but everything is totally hacked & whacked.

So, what we're going to do, is cut the frame's backbone a couple inches in front of the seat forging area, and then take a cut on the front downtube about 2/3 the way down from the neck, and toss it in the scrap frame pile. We're going to make a new backbone, neck, lower tank frame tube, and a partial replacement of the front downtube.

We'll take the neck height up about an inch higher than stock, but we'll keep it at around 32-35 degrees. When we rebuild the neck area, we're going to try and give it the look of a 45's neck forging. We're also going to try and keep the "swan's neck" shape of the front downtube, too. While we're at it, we're going to see if we can squeeze a 5 speed in back there, too.

But the first thing on the agenda is to figure out the peliminary cuts, do those, and then we can get at the seatpost repair. Once that's done, we can start the rest of it's reconstruction.
Posted by Irish Rich at 4:45 PM