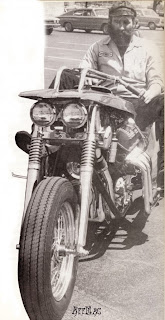 "The most insane burnout I ever seen was by Dick Allen on his trike. That trike was the baddest bike ever". Dick had been at Roth Studios on a sunny day in the late '60's, and was pulling out onto the street on his V8 trike, while Darryl was standing by the shop doors.

"I was yelling at Dick to do a burnout, so he looked both ways as he pulled out and just full-throttled the bike. He lit 'em up out of the driveway and was drifting sideways down the street before the rear wheels hooked and right before he went under a bobtail truck, the bike straightened out and he barely went around it. I can close my eyes and still see it. Amazing".