From time to time I get Emails pertaining to something that I've posted here on Applied Machete, and a few I like to share with everybody, and here's a couple.......

Beer, from the Rogues MC in The Netherlands, sent me the photo below. He's not sure if either he or his Brother Schweik shot it, but it's a photo of Phil Ross and Lou Falcigno (C&L Hog Shop), taken in Sturgis by one of them, during the 1990 50th Anniversary. Lou was another faithful user of Phil's belt drives.

Beer didn't give a location, but it looks like it's at the Rat's Hole Show, in City Park. Beer thinks it might have been the same day that the photo of Phil and Rip I posted below may have been taken. Good possibility. Thanks Beer! Check out the Rogues' blog, too:
http://www.rogues-mc.com/ 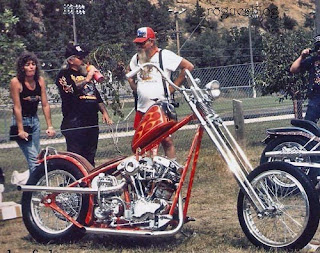 Also, while I was away in L.A. a couple weeks ago, I got a nice Email from of all people, Pete Pepe ( see my post here from 10/18/10, on his CFL Wasp) . Pete says that he documented the whole Wasp build from the conception to final "put together", and says he'll be digging out those photos for me. I've asked if I can share some of them with all of you, so we'll see......I sure hope so.

Again, it never ceases to amaze me on who reads this blog. Anybody else who would like to share other photos, background info, or remembrances on things I've posted here are more than welcome to contact me, I love this stuff, and thank you all!
irishrich@shamrockfabrication.com
Posted by Irish Rich at 11:17 AM

Those C&L bikes are pretty unmistakable, many of them had sweet flame jobs that looked similar in style. Gak from Hawgholic in japan had a pan with a flame job that looked just like a C&L-style one, do you know who the painter was for those C&L bikes? Always wondered what happened to Lou Falcigno also, you never hear anything about him now.

As far as I know Lou Falcigno is still kickin', and building bikes in FL.

The painter for Lou's bikes is a guy named Billy Streeter, and he used to work for Oddi Cycles, but I haven't heard much on him lately. I looked up Oddi Cycles, but their domain is expired.