On December 17, 1977 The Sex Pistols were scheduled to appear on Saturday Night Live. Because of visa problems stemming from some drug busts, they weren't able to enter the USA. Looking for a quick replacement, SNL worked out a deal to have Elvis Costello and the Attractions take the Sex Pistols place - Costello being on tour of Canada and the US, and playing NYC the following week. 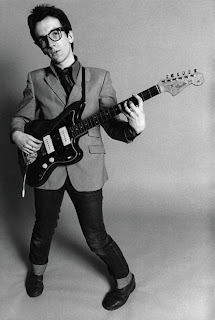 Costello was touring behind his latest album This Year's Model, not yet released in the US, but available in the UK and elsewhere for several months. Columbia, Costello's label in the US, wanted him to perform Less Than Zero on SNL, from his previous album My Aim Is True. Costello, who was backed on that album by Huey Lewis and The News (?), insisted on doing Radio, Radio from This Year's Model, with his now band The Attractions instead.
Radio, Radio was an extremely critical song about the state of the recording and radio industry, and the leverage they imposed on what artists could or couldn't release for airplay. NBC, the network for SNL and holding vast radio stations, and Columbia Records forbid Costello from playing Radio, Radio that night. Costello, feeling that this was exactly what he was trying to get across with this song, agreed. That was, he agreed until airtime......
When their segment came up on SNL, Elvis Costello and The Attractions started in with the requested Less Than Zero, but Elvis waived his hands and said "Stop, stop, there's no need to do this song here....", and launched (much like The Doors did with Light My Fire on Ed Sullivan) into Radio, Radio. Being a live program, there wasn't anything SNL could do, but let it go on.
For that disregard on Costello's part, Loren Michaels banned Elvis Costello from SNL for life, citing that the ban was because Costello had tampered with the scheduled air time SNL was allowed, and caused the program to run over its allotted time slot. Others say the ban was because Costello thumbed his nose at Columbia and NBC, who knows.

Elvis Costello's lifetime ban on SNL was eventually lifted 12 years later, in 1989, only one of three SNL performers banned to ever have that happen. Costello performed on SNL in '89, '91, and re-enacted his banned performance with the Beastie Boys on SNL's 25th Anniversary show in '99, with the blessing of Loren Michaels. 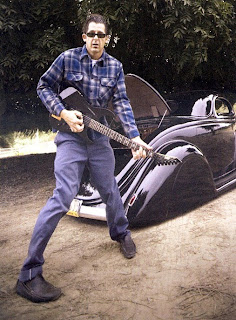 The above picture of Cole Foster was part of a Garage Magazine article, where Garage "road tested" the '36 Ford Coupe Cole had built for Kirk Hammett of Metalica. It was issue #16, October 2007. When Cole built the car, Hammett had asked that he incorporate a hidden guitar and amplifier in the car so "...he could back up to a Northern California cliff, pop the trunk, plug in the 'ol electric axe, and play to the ocean". I dunno, that's what it said in the article. Cole built the amp into the trunk's interior divider panel, and countersunk the guitar into the panel on the trunk side.

Cole and I were attending the Grand National Motorcycle show that same October, and somehow we got to talking about the article. Cole asked me if I had "gotten" the photo of him playing Hammett's guitar, and I said "Sure, you were doing your Elvis Costello...." Cole said "Wow, I wondered if it went over every body's heads".
The original video from the Dec. 17,1977 Saturday Night Live performance is viewable on YouTube, but YouTube won't allow me to share the video directly, because NBC has a copyright clause on it, but you can see it there. They want you to download it and pay for it from iTunes, how ironic!
But, here's the original video of Radio, Radio that appeared on MTV:
Posted by Irish Rich at 10:33 AM

Irish Rich you never fail to amaze me with your good taste in music and motorcycles! If anyone wants to see the video, it is up on a European music and video site

You better do what you are told........better listen to your radio. Nice piece man.

I was in high school. The next day EVERYONE was talking about about that performance. On Monday we were at the local record store, only to have the sales clerk say, "Elvis who?".

No downloads back then!