That was the slogan on Phil Ross' business card, for Super Max Belt Drives.

A little while ago, I approached Street Chopper Editor Jeff Holt about the possibility of myself doing an article on Phil Ross, and Super Max Belt Drives. Jeff said "ABSOLUTELY!". With that go-ahead, I contacted Vyvyan Ross again, and asked her if it was something that she'd like to do, and Vyvyan said "Oh, that sounds like a lot of fun! I'd love to do it!".

So, on our way back from The Mooneyes Christmas Party and David Mann Chopfest, Part-timer Steve and I took the long way home, and made a couple stops. Heading out Monday on I-10, we first stopped in Phoenix, to see an old friend of Steve's, and a guy Steve introduced me to in Sturgis, Dougie. From there we headed up I-17 to Cottonwood, to spend the night.

The next morning, we met Vyvyan Ross for breakfast "downtown", and afterwards, followed her up to her house/shop where Phil and she had spent many years together. Inside, Vyvyan had carted out four big bins, and I don't know how many albums of Phil's photos, from his time in the Air force, all the way up until he had passed away last year. We poured over the photos, played "Do you know who this is?", and as we looked, Vyvyan recounted countless stories (some I can print, others best left for Vyvyan to share with you if she wishes sometime) about both she and Phil. It was a wonderful time that I'll never forget. 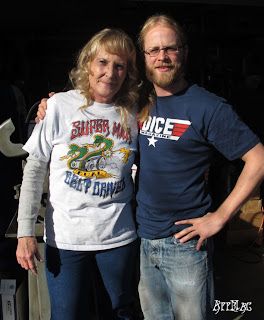 Vyvyan Ross, and Part-timer Steve posing for posterity. Vyvyan is one of the nicest gals I've ever met, and a real sweetheart. We had a great time going through all of her's and Phil's photos. The time just flew by, and before you knew it, we had to say good-bye, and hit the road. Here's just a small selection of those photos to pique your interest, I'm saving the best one's for the article. You're gonna love them. I just hope I can do Phil Ross justice when I write it up. Look for the article coming up in Street Chopper in the very near future. 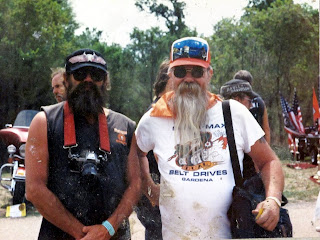 Photo courtesy of Vyvyan Ross
One of the hundreds of pictures we poured over that day. Here's Phil and Rip Rose, of Ridin' With Rip fame, around 1990. I have Rip's lathe, that's the one I've posted about on here previously. I sent this photo to Rip's daughter Kristina, and she shot back "I still have that Tshirt....and that camera!". Phil knew everybody, and everybody knew Phil. 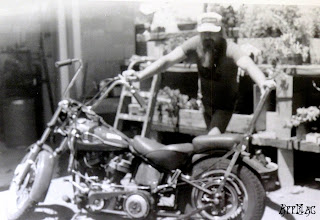 Photo courtesy of Vyvyan Ross
Phil Ross in '77, posing with Mighty Hog - "World's First Double Belt Drive Motorcycle", and we ain't talkin' antique leather belts, either. Phil started with a set of bare cases, and built the bike around them.... 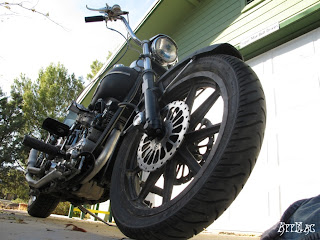 .....and here it is today, 33 years later, and ready to rumble. You can spend hours going over this bike, Phil touched every single part on this bike. Vyvyan said this is a scary-fast motorcycle, and I don't doubt it one bit. 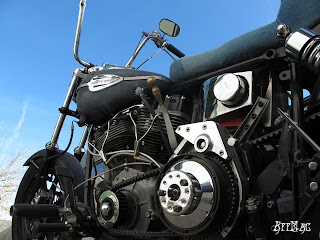 The "business side" of Mighty Hog. Check out all the handiwork, especially the shop-brewed electric start setup, and hydraulic foot clutch. 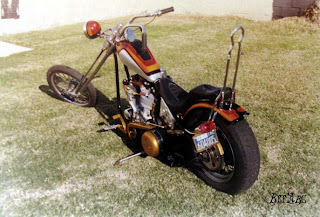 Photo courtesy of Vyvyan Ross
One of the dozens of unidentified mystery bikes Phil had taken pictures of with his belt drives on them. I'd sure like to know who owned this bike! 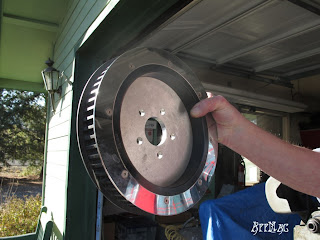 That mystery bike has South Bay written all over it. I'll ask Joe if he recognizes it.

Rich, The mystery bike was owned and built by Bruce Parrish. It's kind of a trip as I found this out today from two sources... one of them being Bruce.

Nice, you'll have to change your name to Chris Marlowe, private eye. Thanks.

Did you ask Bruce to contact me? I hope so.

Hi Irish Rich. I have heard your name many times, but we have not met ... yet. This is Phils brother, Norm. We are manufacturing SuperMax Belt Drives now, so can make any SuperMax pulley that you need. I see that you are looking for a 66T wheel pulley. Do you have a Pauchco frame? We hope to meet you soon. Thanks, Norm Ross