When people talk about bikes and builders from the late '60's-early '70's, one person who is totally overlooked is Gary Hetrick. At that time, a machinist by trade, Gary was bitten by the chopper bug, and decided to build himself a bike, but not just any bike....... 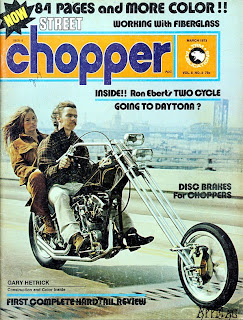 Gary Hetrick's riding cover shot for the March '73 issue of Street Chopper. The bike appears to be black in this shot, but in reality it was various candy purple shades, faded over a white pearl base. 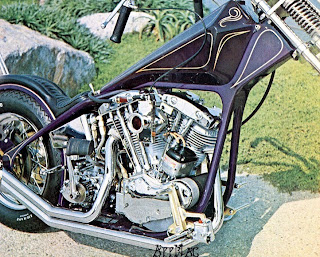 Just take some time to soak in all the detail and trick components Hetrick incorporated in his build. His fabrication skills and machine work from 30-odd years ago would put a lot of builders with their CNC machines and modern equipment to shame today. 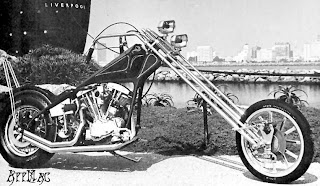 Hetrick started with a '69 ex-LAPD cop bike. Gary took the frame, and extended it out 4", then he added another 1 3/8" of rake to the neck. He built his own hardtail section 2" shorter than an original rigid frame.

From there, Hetrick made his own 21" over springer front end out of 4130 cromo tubing. Then, he fabricated the gas tank, oil tank, and just about every other part on the motorcycle you can see, in his spare time at his machine shop. Gary then made all his own oil and fuel lines out of Earl's AN supplies, and used aircraft grade stainless allen head and nylock fasteners, along with safety wiring every critical fastener, to secure every component on his bike.

This bike was light years ahead of what everybody else was doing at the time, and would still be a knockout even today. 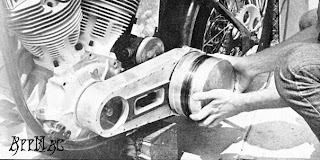 One of my favorite pieces on Hetrick's bike, the machined inner and outer primaries. Gary started with a 56 lb. block of aluminum, and 25 lbs more for the compensator and clutch domes. When he was finished, the primary weighed in at a svelte 28 lbs. All this machine work was done on a manual rotating milling machine, and consumed 158 hours. NO CNC! Wow 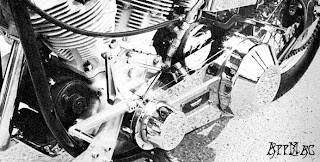 The finished primaries, just beautiful. Good shot of the machined forwards on the shift side. Also note the tinted inspection window with the H-D pin in the center. 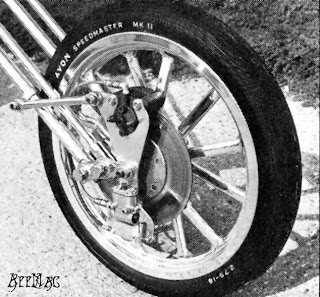 I saw on another message board that somebody was touting how they had incorporated both their front caliper and their master cylinder into the same bracket. Sorry, Hetrick beat you by 37 years! Gary ran his front brake cable inside his rt. rear springer leg, and connected it to a H/A "pull" master cylinder. Nice polished American 12 spoke wheel, too. 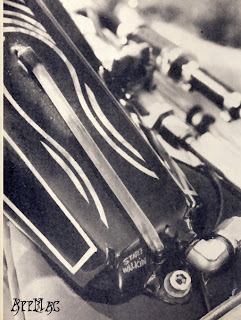 All you guys with your gas tank site tubes.....again, 1973, nothing is new. Check out the lettering at the base of the tube - START WALKIN'. 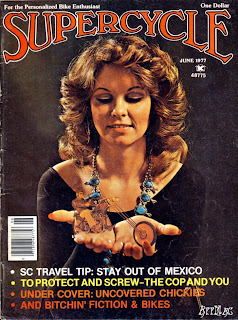 OK, now this has to be the coolest cover photo ever for a chopper magazine! Here's Gary's bike and feature article for the June '77 issue of Supercycle. Still rolling 4 years later, with a few new components.

Like all of us, Gary couldn't resist changing things around some. His bike now sported Cragar Super Trick wheels front and back (adapted by Hetrick), new disc brakes, paint, gold leaf, and Gary decided to build himself a new 22 over girder front end.

The front brake was still cable operated, but this time Gary ran the cable to a master cylinder hidden behind the headlight, with the hydraulic line run internally in the rear leg of the girder to the caliper.

Gary also punched the engine up a little, giving the tired cop bike engine a .060 overbore, 9:1Venolia pistons, 468S Sifton cam, lifters, and pushrods, and had Jerry Branch fit the heads with big valves and a port and flow job just for good measure. 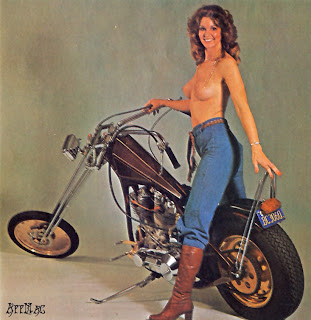 Color shot from Hetrick's Supercycle spread. Here you can see the gold anodized Cragar Super Tricks, and the new paint and leafing. The paint appears brown in the color plates, but was actually a candy plum toner over a gold base. 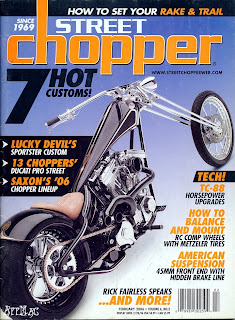 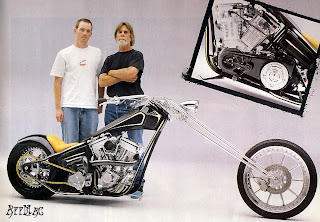 Gary dabbled in parts and machining for other people's choppers for awhile, then picked up sign painting, lettering, and pinstriping, which made him a good living for the next 30 years. Choppers had made a big comeback, and Gary had the desire to build another bike, but never seemed to have the motivation.

Well, after his wife had a bout with breast cancer, and was recovering, Gary himself was struck with prostate cancer, which he also beat. Hetrick felt that beating his cancer was the perfect motivation to build another chopper, and also the perfect "therapy' that he needed in his life.

As with his first bike, Gary made every single part for this project, save for the modern big-inch Evo, and the Baker RHD 6 speed. Gary built himself a frame jig, bent all the frame tubing, made the gas and oil tank, wheels, controls, primary, 22 over girder front end (with hidden front brake line), and everything else you can think of. When he built the frame, Hetrick decided that he wanted the perfect tire-to-fender clearance, so he made the rear axle stationary, and used an idler gear to adjust the rear drivechain. Little touches like this are all over the bike, and like his first project, you can spend hours discovering them.
Posted by Irish Rich at 11:20 AM

Again you beat me to a post. He also had a Sportster featured in an earlier issue too. Still have both issues. The shovel was a beautiful bike. I used to stare at that feature all the time. Never saw the Supercycle article. The first version will always be the best. I wonder if anything is left of it today?

thanks rich. this is what i like about your page, tons of cool info and history.

Yes, yes, yes! That first version is far out and very advanced for the time, people have no idea and even if flipping through that issue you need to stop and study those pics, a favorite.

That same issue has Trevs el Jefe... BLEW MY MIND!!! and a SMOKIN ASS on a honey named Jaime.