In the same April '83 issue of Truckin' magazine that I pulled Stan Betz's shop El Camino painted by Von Dutch (check back down the posts to see it), they also featured Arlen Ness' custom '77 E100 van, which he called the "Harley Hauler". Calling this van "custom" is an understatement, and featured mods done by a varitable "whos who" in the rod and custom field.

Good thing Ness was still building diggers, because you couldn't have gotten anything else in the back! When this van was shot, it already had 55,000 mi. of hauling bikes around to shows, on it's modifications - a testament to the craftsmanship of all the people involved with the project. 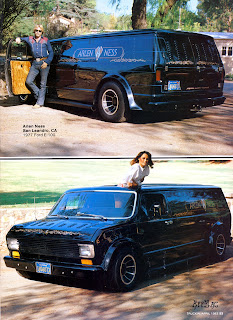 For starters, Ness took the van down south to the absolute master of the top chop, Dick Dean. Dean removed a straight 6" of roof height. Then, Arlen hauled it back to the Bay Area, where Rod Powell stepped the frame 8", and sectioned the body another 6".

Arlen himself, along with Bob "Mun" Munroe handled all the interior modifications to the dash, "doghouse", door panels, seats, and all the related components like the gauges, steering column, garnish moldings, and the factory A/C unit to fit the new low body profile.

From there, it went to Jack Hagerman to get its hood louvered. Next, it was shipped to Kenny West's shop in Fresno, where its rear door panels were louvered, the metal flares were constructed, and a power sunroof section from a Thunderbird was grafted into the front roof panel.

After all the mods were done (all in steel, mind you), Ness sent it to Paul McElly in Hayward for the bodywork and paint. Anybody that knows anything about doing a black finish knows how much time, blocking, and sweat it took to get that super modified body to the point of painting it. The least little flaw under black paint sticks out like a rubber pee-pee. This van was flawless when Jeff McCann and Dick DeBenedict did their pinstriping and gold leafing on it. Of course, Danny Grey handled the entire custom interior.

To round out the package, Arlen added Western Wheel Turbo Vector rims with the recesses blacked out, BF Goodrich Radial T/A tires, and a set of Hooker headers and sidepipes in black ceramic.

The article never mentioned an overall height for the van, but with Arlen standing next to it, it looks to be less than 5' tall overall. Wow! I wonder where this van is now, or if Arlen still has it? Anybody know?
Posted by Irish Rich at 11:19 PM