You might not recognize the name Bob Tronolone. But, readers of Bikernet.com will recognize him as "Bob T", the contributor of many articles and those fantastic old motorcycle photos over there. Keith Ball and Bob T go back a long ways, and have ridden together for years.

Bob T left the Marines in '71, and he proceeded to buy a Harley Servicar that he fully tricked out, including a long Dick Allen springer. Bob rode that around for a while, then sold it and decided to get himself a new Superglide. 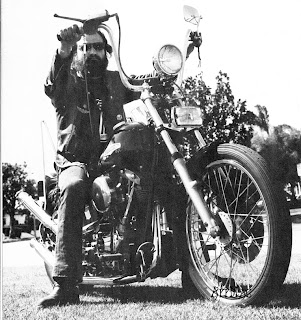 Bob T bought his '73 FX Superglide new, and proceeded over the next 4-odd years to change it around a little. He bobbed both fenders, and hardtailed the frame. Next, he added a US Mag 12 spoke rear wheel w/a Performance Machine brake, and swapped out the 19" front for a 21" rim, and kept the FX's hub and disc brake. The front end is stock lenght, with polished sliders.

The engine stayed pretty stock, with the addition of Sifton solid lifters, and an earlier 7" round air cleaner. Bob T made his own exhaust, and added MCM mufflers. The transmission was filled with Andrews gears, and Bob did the ratchet top jockey shift/foot clutch setup, and added a D&D kicker cover. Bob lost the cast inner/outer primaries, and used a Phase III belt drive with a Phase III cast alternator cover.

Other notable parts on this bike are the early tool box, speedo, horn, and '47 tail lamp. Cheat'ah supplied the seat, and Dennis Weitzel made the 32" sissy bar. Bob also added full braided oil and brake lines, and an oil cooler. Paint was done by Don Fadden at Custom House, and Ron Tessensohn did the tank's murals.

Bob T still owns this bike, and it's kept in very roadworthy condition. 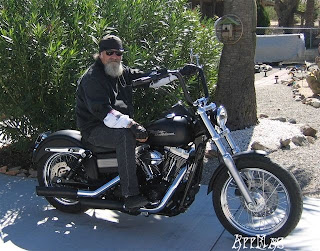 Here's Bob T, 33 years later, on his Twin Cam Dyna. A little greyer (hey, aren't we all?), but still putting down the miles.
Photo courtesy of Bob T
Posted by Irish Rich at 10:57 PM

You always look back and wish you'd kept "that one" - glad to see he did.