Like I said, I've never seen this photo before, and you probably haven't, either. What it is, is a H-D Factory studio portrait of a 1980 double-belt drive Sturgis, resplendent in it's blacked-out glory, with a couple of additions that never hit production.

From looking at the photo, you all ready know what they are. "They", are a pair of 2 piece, bolt-together aluminum rims, in 19", and 16" respectively. Click on the photo, and you'll see that the blacked-out centers have chrome Allen bolts fastening the wheel halves together.
It looked like Harley was comtemplating offering these wheels for the '81 Sturgis model, and passed. The 19" solid front was never offered for a production bike, but Harley did offer a true 2pc. spun aluminum rear wheel on their '84 FXRDG Disc Glide, the all blacked-out '84 FXDG Willie Glide, and on the FXSTC Softail Custom in '86-'87.

The 2pc. rear wheels on the above later models weren' the same as the wheels on the Sturgis pictured below. Those wheels offered were made by Centerline Wheel, and they were just like the automotive Centerlines, 2 spun halves, with the halves rivited together with rivits, that have washers on their "clincher" side.
I'm going to take an educated guess here, and say that Motor Wheel & Rim was tapped by H-D to prototype the wheels that we see on this Sturgis. MW&R did a lot of wheel prototyping and initial run manufacturing on Harley's 9 spoke and 16 spoke aluminum wheels in the '70's-'80's, until Harley had them cast at the Winters Foundry (which, by the way, was owned by GM!). The 2pc. wheel halves below appear to be a machined casting, not a spun wheel. 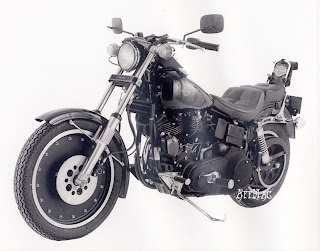 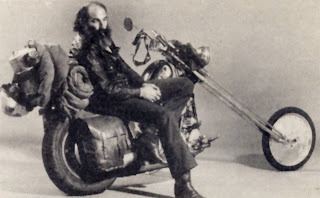 Is it just the photo, or did they diamond cut the heads as well?

Nah, just a series of "dots" to highlight the fins, if you look close at the full sizd photo.

Not uncommon for H-D to "retouch" a photo like that, or to airbrush in a new logo, or airbrush a particular accessory out, for example.