Hey, how cool is this?

If you've followed my blog, you know all about Part-timer Steve, who helps me out here. You've seen Steve's custom in this blog, and in Street Chopper last fall. What you might not know is that Steve comes from a long family line of motorcycle riders.

When Steve came over today, he handed me these photos, and said "Hey look, my Mom finally sent me pictures of my Dad's bike that he built in '71". I had to scan them, and put them up here for everybody. 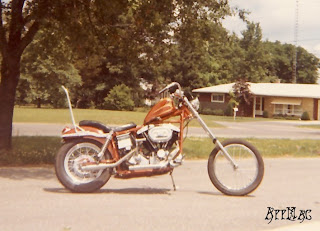 If I got the story right from Steve, his dad took a brand-new(!) '71 Superglide apart to give it the treatment. He didn't have a place to do the work, so he dis-assembled the bike at his now wife/then girlfriend's house, and did the work in her basement.
The bike is period perfect for a swingarm bike in '71. I also want you to note that the frame is painted to match the sheetmetal, this was no half-way project. Steve also told me that when his Mom and Dad got married, they took their honeymoon aboard this bike! 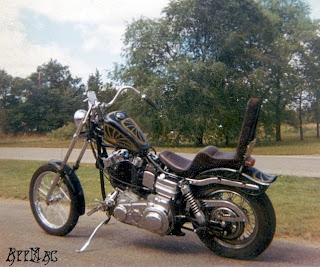 Same bike, 1974 - new paint, rear fender, and the Superglide's OEM fender is on the front. Check out the Paughco electric start diamond outer primary, and the Minestrone king & queen seat!

Steve's dad still rides from his home in Wisconsin to Sturgis every year (on a later model H-D, the Superglide is loooong gone) and still camps out when he gets there. Steve and his brother ride up and stay with him in Sturgis - all three of them have a group of friends that they reunite with in the campground, and have a great time every year. I've met Steve's Mom and Dad, and they are really genuinely nice people.