A Hells Angel goes to the Smithsonian

Sometime in 1989, a plain package arrived at the Smithsonian, with no return address. When the staff opened the package, the contents consisted of a set of Hells Angels colors, a couple photocopies of news articles, and a handwritten letter...... 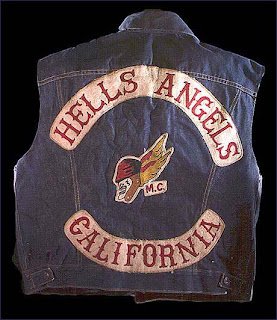 The back of Hairy Henry Kot's vest, and his colors. Check out that the rockers and the center patch are chenille-based, just like old school athletic "letters" were, and the red lettering and center patch are all hand chain stitched on a sewing machine. Also notice that Henry's center patch is still the original two-winged patch, not the first variant of the single-winged Deaths Head patch that the majority of the Club had switched over to at that time. Frisco Charter members were still wearing the two-winged center patch as late as 1970.

........The letter inside the package read:
"Dear Gentleperson, The enclosed Hell's Angels jacket--about 1960's--is for the Smithsonian. It is an authentic jacket owned by Hairy Henry or Hank as he was more commonly called. Each patch bearing a man's name was worn in memoriam for his lost brothers. Hank has since passed away and I felt you were the appropriate entity to receive this jacket. The enclosed pictures represent the event that brought Hank & George into much public eye--Hank leading a freedom--Freedom NOW--march down Haight Street. All of this notwithstanding, the Smithsonian does seem to be the appropriate keeper of such a piece of America 1960's. I hope you share my belief and give this a place.
Sincerely, Roz Kot" 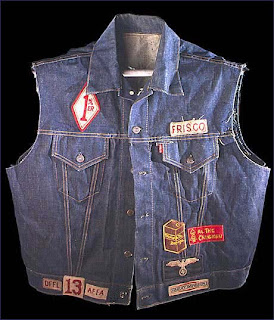 The front of Hairy Henry's vest, showing the memorial patches Roz Kot talked about in her letter. One memorial patch is for Al The Chinaman, and the other is for Chocolate George. If you look close, you can see that George's patch is in the shape of a quart of chocolate milk - because that's how George got his nickname, he was forever drinking chocolate milk! 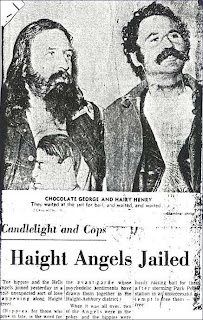 One of two photocopies included by Roz Kot with Hairy Henry's colors, referred to in the letter that was sent along with everything to the Smithsonian. 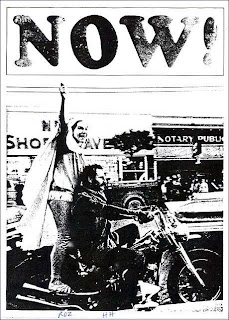 Note the notations at the bottom of the 2nd included photocopy, written in pen by Roz Kot, identifying the people in the photo as "ROZ" and "HH". For the story behind these photocopies, see below: 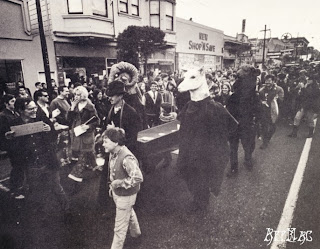 The NOW Day demonstration as it moved along Haight St.
Photo by Gene Anthony

In December of '66, to ring in the New Year, the Mime Troop, and the Diggers decided to have an impromptu bit of street theatre to mark the ".......rebirth of The Haight, and the Death of Money". The Mime Troop decked themselves out in their theatre costumes, and carrying a wooden coffin containing some paper money, headed out on Haight Street from the Straight Theatre. As they picked up people along the way, the Diggers passed out penny whistles and small placards that read NOW to the gathering paraders.
Well, the San Francisco Police didn't like the goings-on, and with the marchers not having a permit secured, decided to break up what had now grown into a roving party. They dispatched several patrol cars, a paddy wagon, and several motor cops on trikes to disperse the crowd while they still could do it easily. The trikes pushed the crowd back on to the sidewalks, effectively ending the parade. 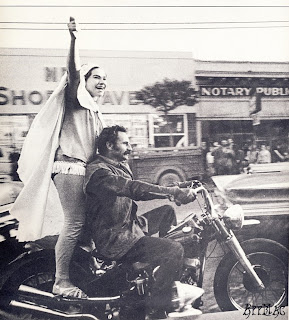 A much clearer photo of Phyllis (Roz) Willner on the back of Hairy Henry Kot's bike.
Photo by Gene Anthony

As the crowd on Haight was starting to settle down, who would come along but Hairy Henry Kot, with his exhaust blasting off the buildings, backfiring, and with Phyllis Willner riding on the back of his bike shouting "FREEEEEEEEEEE......" at the top of her lungs. The cops, thinking somebody should pay for a good time after they had settled things down, pulled Hairy Henry over, and charged him with "...allowing a person to stand up while operating a motor vehicle". 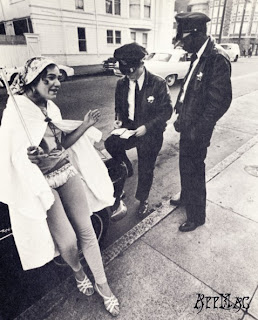 Phyllis (Roz) Willner being questioned after the traffic bust involving herself and Hairy Henry Kot. Phyllis went on in later life to become a Registered Nurse.
Photo by Gene Anthony

Subsequent to the traffic bust, the Cops found out Hairy Henry, recently released from San Quentin, was in violation of his parole. They immediately arrested him. Chocolate George, seeing this, also immediately dove into the middle of the whole fracas to free his Brother, and was arrested as well.

As the two Angels were being hauled off to the Park Police Station, on the edge of Golden Gate Park, the Mime Troop and the Diggers passed the word to the crowd to head west and rally at the Police Station and attempt to "free" George and Henry, which everybody did. 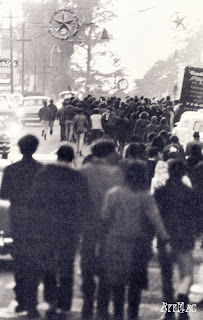 The crowd heading West for the Park Police station. Note the Christmas decorations on the lamp poles.
Photo by Gene Anthony

When the crowd of several hundred reached the Park Police Station, the desk sergeant sent word out to the crowd that the bail for Chocolate George and Hairy Henry had been set at $2,500 , and if they could raise 10%, the Angels would be out. Immediately, the hats were passed, and everybody (including the cops at the door of the station) threw in what they could spare, and the bail was posted. George was let go right away, but Hairy Henry spent a little more time in the lockup because of the parole violation beef.

The then President of the Frisco Charter, Pete Knell, overwhelmed by the support and generosity of the hippies towards Chocolate George and Hairy Henry, told them that he would not forget what happened. And, to show their thanks, the Frisco Hells Angels threw a party on New Years Day '67 - "The New Years Day Wail" in the Panhandle of Golden Gate Park for everyone in The Haight. The Frisco Charter provided a flatbed truck, the sound system, all the beer, and the Grateful Dead for everybody's enjoyment.

DID YOU KNOW......that anybody who wishes to, can donate anything they want to the Smithsonian? The Smithsonian accepts any type of "Americana" for posterity. It might not go on exhibit, but it gets cataloged and stored/preserved forever, for future generations.
Posted by Irish Rich at 7:28 PM

Great story... has the vest ever been exhibited?

Damn good article. Thanks for posting this, Rich.

Really good write up. Thanks !

As always Rich..GREAT STORY!!! You posy some of the coolest stuff out there..keep them coming..Roadside

I like it. This shows the good side of what most people perceive as bad. Thanks Rich

Excellent post as always Rich. Hope all is well...

What a great piece of 1% history. I am 30 and have learned alot about the past motorcycle culture from you. Please continue to write articles like this one and I hope you will return to G.k. Thank You, Irish Rich!

Thanks for sharing that Rich!

Dear Rich, great write up! Is the cut now or has it ever been on display at the Smithsonian?
My goal is to someday do a proper installation with my collection, not at a small town local museum, but one that merits the attention these old club colors deserve!
Thanks, your brother jd

As far as I know, I don't think its ever been on exhibit. Like I said, they have a LOT of stuff that's never seen the light of day after the donation has been made. They take the donation, catalog it, and store it. Sometimes they will pull out things for a special "theme" exhibit for a limited period of time, and then they go back in the warehouse afterwards. Kinda like the Peterson does. Sometimes you have to be in the right place, at the right time.

For example, I know of at least 6 Hawken rifles that have never been exhibited, but you can view them if you ask before you visit The Smithsonian, and give them time to locate them, which I've done.

Hey, take me to Japan with you!