I was going through some old photos in a box, and ran across a photo of my old '54 Dodge Power Wagon. I'm pretty sure all the other photos of this truck (along with a bunch of my bike photos) were destroyed. We had a roof leak in the attic we didn't know about, and it ruined a bunch of our early photos. I still have this one, though. My ex and I used to affectionately call this truck "Dick The Bruiser", after the late '50's wrestling star and champ. I loved this truck, but when you're just starting out in life, and you've got one son, and another on the way, there wasn't any way to keep the Power Wagon, and buy another vehicle. It was sold, and a brand-new '73 Blazer took its place. 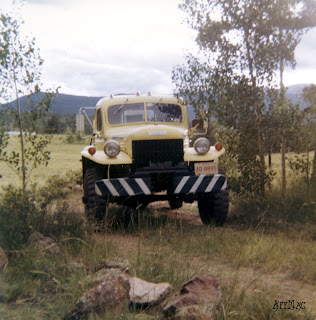 Somewhere near the Mt. Of The Holy Cross, Colorado.

It actually was a '47 chassis, with a '54 body, and it had the original paint. I mean, you just have to love those clamshell fenders, and the bifold hood that was hinged down the middle. About 5 minutes work, and the whole hood would come off. When I got the truck, the flat 6 was seized up. A friend totaled his Pontiac, and I was able to get the 326 and Muncie M22 "Rockcrusher" 4 speed out of it. A foot long driveshaft let the transmission connect to the original transfer case, and we were in business. The Pontiac oil pan let me hook up the original 14,000 lb. Braden power takeoff winch. That thing was a killer if you weren't careful. It would spool in and out under power, so you had better have it hooked to something solid when it started pulling!

The suspension was all original - 14 leaf springs in the front, and 23 leaf springs in the back. The wheels were Budd Army 16", with 5 lug nuts you needed an 1 1/2" socket to loosen. The axles were 4:53's, not so good on gas mileage, but this thing would climb up and over anything you pointed it at. It would go over and through rocks, sand, snow, mud, logs, whatever was in the way. Only drawback was that it had "Armstrong" steering, but it had a steering wheel that was the size of a Peterbilt to compensate. It had a 40 gal. gas tank, and you could head out on the jeep trails and mining roads all weekend long.

The windshield had a crank on the dashboard that let you open the whole windshield out about half-way for ventilation. The bench seat would fold open, and there was a big storage compartment underneath it. The truck had two heaters inside, one for the cab, and one just for the window defrosters. It sounded like a Sherman tank inside the cab but it was glorious. People would move out of the way when you came down an onramp, and when you pulled up behind somebody on the freeway, getting them to move over was never a problem!

I sure miss this truck, and I wish it was parked in the driveway right now. 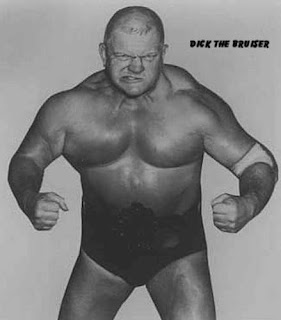 In case you were wondering what Dick The Bruiser, "The World's Most Dangerous Wrestler" looked like...here he is. Go look him up. Fuck Triple H.
Posted by Irish Rich at 9:40 PM

One day while cruising around Indy I peeped a '54 Ford truck hidden behind a tall wooden fence. Parked right next to it was Dick The Bruiser's red metalflake dune buggy, no shit.