I've known CJ Allan ( and it's Allan with an "a", not an "e") for a long time. You spell his name wrong, and you'll really get on his good side right away, let me tell you. CJ is fond of saying "New time, new day, new deal. It'll never be the same". And, he's right. CJ comes from a time long past. A life-long member and former President of the Hessians M/C, CJ is one that's lived the life, and has truly paid all of his dues in full.

While CJ has been as "serious" as any person could be, there's another side of CJ that some people don't see. He likes to tell you "To know me is to love me", and that's true. Because, under that gruff exterior is, well.....a gruff interior! Nah, I'm just kidding (?). CJ has a heart as big as all get out, but don't spread that around. If you're his Brother, or his friend, there isn't anything he wouldn't do for you, and I love the guy dearly. 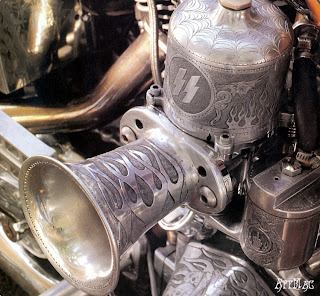 From the May '92 issue of Supercycle, a great photo of CJ's fully engraved monster SU carburetor. This photo has been around the internet a bazillion times, and still never fails to dazzle you each time you see it. It's even more impressive in person, almost jewel-like.

I thought it would be fun to get in the Wayback Machine, and take a look at a small sampling of what CJ has done over the years that made it into print. I've had these photos scanned into my computer for quite a while, and I had a little time this afternoon to put it all together. I hope you enjoy it.... 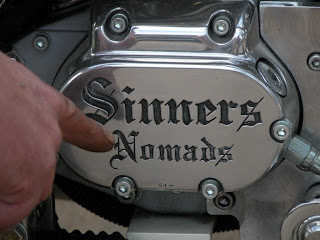 One of the pieces of engraving I have from CJ - a 5 speed transmission end cover. I remember telling CJ I needed this cover before I left for California one time, for the photoshoot of my bike White Heat, and he asked me how quick I needed it. I told him not too quick, but in a timely fashion. He told me to send it overnight. I sent it on a Wednesday, CJ engraved it on Thursday, and I got it back on Friday. The bike sold, but I kept the cover. The next bike I build will have this cover on it, along with a Magura hydraulic clutch conversion inside of it. 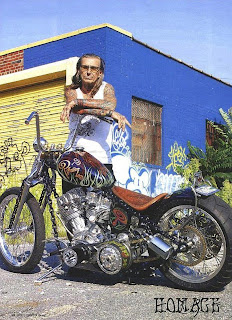 Indian Larry, posing with his Chain Of Mystery bike. Fully engraved by CJ, and probably the crowning moment of both Larry's and CJ's accomplishments in the custom motorcycle world. From my old Homage blog. 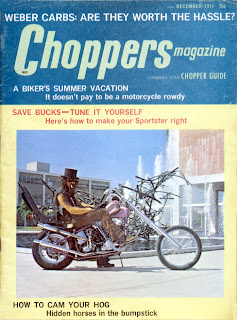 Here we find CJ in repose, in front of the fountain at Long Beach State College. This was the cover shot for his feature article in the Dec. '71 issue of Choppers Magazine.

CJ told me that after the shoot was over with at LBS, they wanted to get some road shots, so they took off down the PCH at about 100 mph, with Chris Bunch riding backwards on Tom Burke's (B&O Cycles) Honda 4 cylinder chop, with his feet hooked around the passenger pegs, shooting film. CJ says he's never seen those shots, though. That must have been quite the spectacle.... 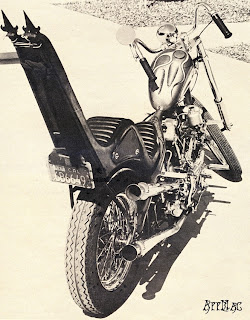 Straight from the freezer, dad. Check out the fully molded frame, scalloped and dished Wassel, fence spiked sissy bar, and the high-backed Smuggler king&queen seat - all by CJ. CJ's motor was brought up to FL specs, sported Branch heads, Panhead barrels, a Randy Smith SU Carb, and an original H-D Lightning cam. CJ said in the article he was already over 20,000 miles on the last rebuild of this engine. 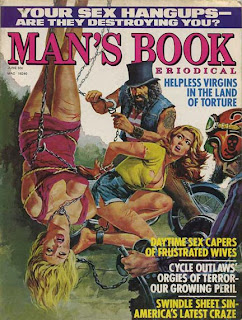 Like I've said before....is there more than a passing resemblance here on the June, '71 issue of Man's Book? I mean, right down to the top hat, and brown roughout leather pants? 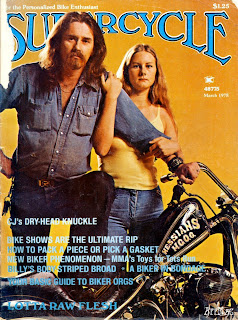 Here's CJ on the cover of the March '78 issue of Supercycle, with his then current version of his Knucklehead. This version is typical of the style of the era, and you'll note that this bike shares a lot of the same "look" and choice of components with other South Bay bikes like Dick Allen's Locomotion, and Joe Hurst's White Bear, for example. 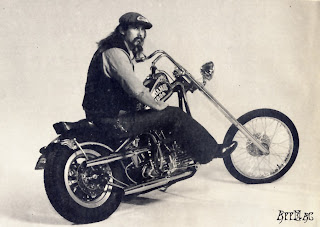 Very cool assortment of parts on this build. The frame is stretched 3", and raked 1". Front end is 12" over, and sports Barney's slimline sliders (CJ still has the tooling for these). The seat came from SoCal Seats, and it sits on a CJ-manufactured fiberglass fender (the Maxi-Fender) and combination license plate mount/struts he marketed out of his shop Creative Cycle Engineering. The mufflers are XLCH tapers, and the rear wheel was a magnesium American 12 spoke equipped with a Performance Machine caliper and rotor. CJ did the setup on the American 12 spoke himself.
CJ's Creative Cycle Eng. was located just down the street from Bob Olson's shop, EME (CJ's father-in-law), and right around the corner from Perry Sand's fledgling Performance Machine, and Nez's Phase 3 operation, all located at the time in Paramount, CA. and all close friends of CJ's. 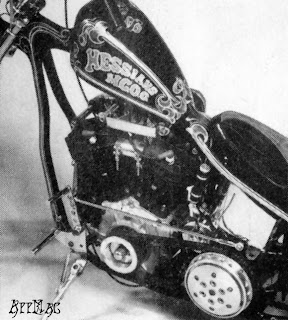 Lots of stuff going on here. Pat Leahy and CJ punched the mill out to 86 cu. in., added a Sifton 450 cam, with 2 1/8" intake, and 1 3/4" exhaust valves. Carburetor was a Weber DCOE, and it was fired by a Bomar-built magneto. All this was transferred to the Leahy-built trans via a Phase 3 beltdrive and clutch that had a 4lb. clutch lever pull, but CJ ran his with a foot clutch and jockey shifter.

The other unusual aspect of this motor was the fact that CJ experimented with running "dry heads" on this engine. He blocked off the oilers to the heads, pruned out the rocker covers, and experimented with different alloys for the guides and seats to be self-lubricating. CJ was able to get a couple thousand miles out of these combinations, but it was just an experiment, and eventually he went back to the old oiling system again.

Pat Leahy has been the only person to ever work on CJ's engines and transmissions, and still does. And, speaking of Weber carbs on Harleys, here's an interesting sidenote. Not many people know that Pat Leahy and Dean Moon were good friends. It was Pat and Dean that worked together on finding the right combination of venturies and complex fuel metering circuits to allow the big two throat Webers to run successfully on Harleys. And, it was their friend Jerry Magnuson who cast up the Big Twin and Sporty manifolds for them. 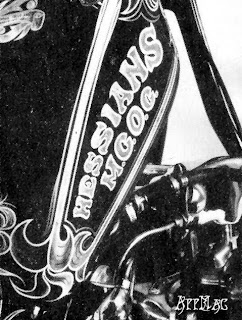 CJ did all the painting, pinstriping (in lacquer), and the gold leafing on this bike. Below Hessians are the letters M.C.O.C., which stand for Mother Chapter Orange County, pre-dating SAMCRO by 30 years. 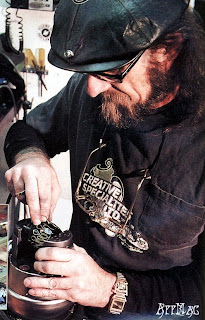 This photo of CJ putting the final touches on some flames in the headpiece of one of his famous engraved Mag Lites. They're aren't too many of those big bodied Mag Lites out there with CJ's work on them. If you have one, consider yourself lucky. From an article in the April '90 issue of Easyriders magazine. 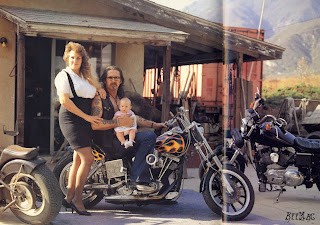 Not exactly American Gothic, but close enough! CJ, Robin, and his little daughter Jzena, at his spread in Devore, CA. These photos come from an article in the May '92 issue of Supercycle. If you look in the lower left, you'll see CJ still had the Knuckle, but it was supercharged by then, and sported a rear belt drive. CJ has promised me he'll send me the full photos of that version of his Knuck. CJ is seated on his main ride at the time - his Pat Leahy-built Shovel.
Jzena is married now, and has a daughter of her own, and another on the way. Man, how time flies. And, how many girls are there that will tell you that her Godfather was "Slave Lewie" Roseberry? Jzena can. 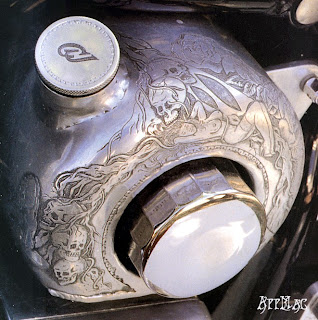 A a not-often seen photo of his oil tank engraving on the same bike. Did you know that CJ and Vern Heinrich were the originators of these iconic spun aluminum oil tanks? 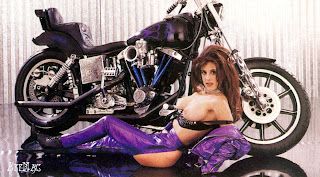 CJ's '81 FX as it looked in the April '97 issue of Easyriders. This time around, it was wearing a Damons paintjob. I'll bet you won't remember who did the feature article on it, do you? It was done by Flynch, during his stint with EZ. I'll guess a lot of you thought Flynch just wrote for Iron Horse, huh? 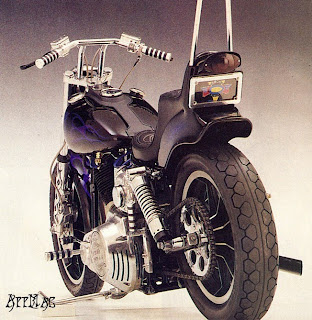 Check out the Crazy Frank fender, seat, and tail light. CJ still has the engine out of this bike. 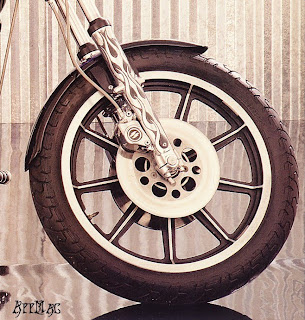 You can reach CJ here:
http://www.cjs-engraving.com/
and, here:
http://cjsengraving.blogspot.com/
Posted by Irish Rich at 9:20 AM

Rich, that was one helluva history lesson!!!! Some really cool shots and info..priceless, Roadside

very cool. thanks for sharing rich!

Rich, Set the wayback machine Mr. Peabody. Chris Bunch, Tom Burke, Pat Leahy, CJ. Early 70's, Long Beach, those were the days my friend. Through in Mouse, and a few more. Talk about being alive. Good work! Down the road, Rich

Yeah, Barry, just go back through my old blog posts, you'll find all kinds of stories like this.

Thanks Rich! Great stuff - as usual.

very cool Rich, I'm very interested in the history / better pictures of "Barney's slimline sliders" as I've seen em on bikepics occasionally, and to what's the history / availablity of 'em?