I had two blogs that I fed - this one, and another one called Homage. I thought it was kinda redundant to run two of them that were pretty much the same, so I removed Homage a few months ago.

I have a bunch of photos from there, and I thought I'd post them up here from time to time. Like these for example. How's about Frank Kaisler thru the years? Hey, Frank called me a day early (March 16th) this year to wish me a Happy Birthday. He said he did that, because he wanted to be the first guy to do so, and "....I didn't want to be stuck on 'call waiting' all day trying to get thru". Wadda guy! 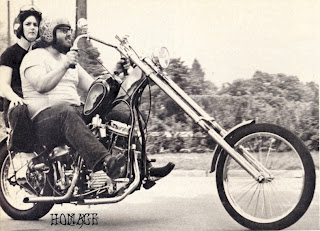 Here's Frank cutting a dashing figure in a Custom Cycle magazine article on Maryland, around '71. Hey, check out those harnass strap boots. Frank was always stylin' even back then! 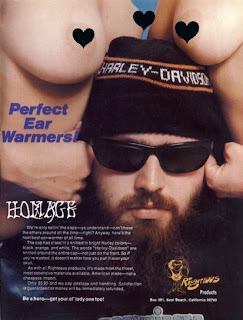 Here's the imfamous "ear warmer" shot for the Righteous Products ad, from '79 that ran in Easyriders magazine for a couple years. Most people don't recognize Frank in the ad. Frank was on staff at EZ for a long time, and did a stint as editor for good measure. Mike Lichter still calls Frank "My old Boss...." 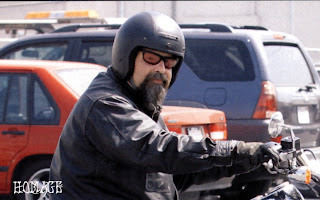 And, here's Mr. Kaisler today, still that dashing figure that cuts a glorious swath across the L.A. basin wherever he goes. Ok, not really, but I just thought I'd build him up a little, because, he really is a good friend of mine, and that makes me a pretty lucky guy.

Strategically placed hearts to fend off the Blog Cops . . . More snow for Colo - How do you guys keep the faith?

Frank Kaisler is by far one of the classiest and coolest guys out there today!!!

In a Sea of know it alls and asses..Frank is the nicest guy I know....I feel honored to know him and hear just a tid bit of the awesome stories he shares with us.. he is a true motorcycle enthusiast.

That he is, Mark, and why the fuck he isn't at the helm of a custom bike magazine right now is beyond me. I can name a few editors who couldn't fix Frank a ham sandwich for lunch.