Got a couple articles published.....

It's been awhile since I've had a chance to do any articles besides my column in Greasy Kulture. So, when Hammer gave me the OK last December to cover the Mooneyes Christmas Party at Irwindale speedway, and the David Mann Chopperfest in Ventura for The Horse, I was really looking forward to doing the articles.

Both events are in issue #97, April '10, and it should be hitting the newstands right about now. I think the photos they chose (shot for me by "Dame Digital" Kristina Pamias) were adequate, the articles are good, and we had a good time covering the events, and I saw a bunch of people I knew - some I haven't seen for years. 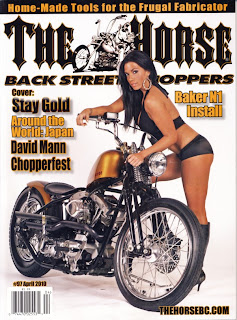 The magazine also has a good article by Nelson Kanno on their "last Saturday of every month" ride-in lunch gathering at Santa Fe Importers in The LBC, ChopperDave did a spread on this year's GNRS, and Dan Roedel does a good tech on the Baker N-1 shifter drum installation. Also, there's a killer feature on the bike Fab Kevin and "Poolboy" built - that's it on the cover.

And, my feature on the rigid shovel I built for Chris Worrell publishes in the next issue of IronWorks, and I have a tech article on the Led Sled Sporty hardtail install I just finished on Dan's bike coming up in IW in the near future, as well as my usual column in GKM, which should be going to print next week.

I have a ton of photos from both David Mann and The Mooneyes Christmas Party that The Horse didn't run, and I'll post up some of them for you from time to time. Kristina photographed some just georgous bikes at David Mann, and you can see how deep the water was at Mooneyes, from the monsoon that hit SoCal that weekend.

Now you see why I haven't been on here updating my blog?
Posted by Irish Rich at 11:10 PM

I gave up on submitting articles to THBC. I think I somehow rubbed the old editor the wrong way. Though I still pick it up from time to time. I will be sure to get this issue and the IW ish too. I always dig reading your stuff Rich.