More of my favorite quotes from our trip....... 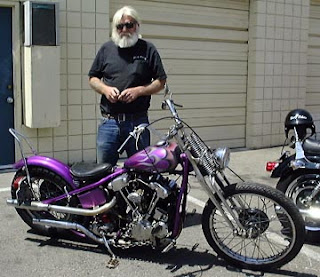 Droopy and his Knuckle, built in 1963. Still owned and ridden by him.
Photo courtesy of the Early Riders site.

At Bob's Big Boy, the night of July 3, 2009. Frank Kaisler to Droopy:
Frank: Hey, Droopy, didn't they knock your house down when you were gone one time?

Droopy: Fuck, leveled it! That was a bad month. My bike blew up, I got stabbed in Venice Beach, and when I got out, I went home, and the whole fucking house was gone, there wasn't anything left of it, just a vacant lot!

I lived in that house for a year, and never paid any rent. My landlord would come for the rent, and I'd tell him FUCK YOU! and slam the door. He came in one time when I wasn't there, and took the toilet, trying to make me move out. Fuck him, I just shit down the pipe.