A keepsake I picked up in Sturgis, from '82 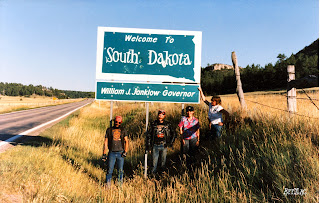 Notice how clean my jeans are in this picture. The guy I was with had a '79 Sporty that broke down constantly on the way up and back - go figure!
Happened to find this shot going thru a bunch of old pictures. It's a picture taken in '82 on the way up to Sturgis, my first trip up there.

I'm pretty sure the photo was taken on 16, right at the Wyoming/South Dakota line. I'm the dashing figure second from the left. I was 30 years old. I still have that jacket! I can't wear it anymore, because I guess the humidity in my closet was high, and the fucker shrunk. Well, at least that's what I'd like to think happened. Notice the buckshot holes in the sign.

I remember pulling off of Junction Ave., and on to Main St. I'd never seen anything like Downtown Sturgis ever. Even though I'd been riding all over the country for 14 years, I remember saying to myself "You know what? You're here in Sturgis, you finally can say you're a motorcycle rider".

1982 was probably the beginning of the end of the old rough and tumble Black Hills Motorcycle Classics. I refuse to call it the Sturgis Rally and Races. How fucking generic is that name? It stayed pretty cool until around '86 or so, then it went kinda pussified by the time the 50th anniversary rolled around in '90. Don't get me wrong, I still ride up there, and Sturgis is still about the only rally left where the majority of people still ride to get there. It might seem that that isn't true anymore, but that's because of the sheer numbers of people that attend. It's also still a place where if you're bound and determined to get your ass kicked, and you're in the right bar, somebody will make that a reality for you

'82 was a crazy year in Sturgis. They "officially" had 32,000 people attending, and the town and the cops were freaking out. More than a couple M/C's were looking to settle things once and for all, and every cop was right on the edge. I wasn't even riding with a club at that time, but I remember getting a $50.00 ticket in Deadwood for wearing a Buck knife - $25.00 for the knife, and $25.00 for telling the cop "Are you shitting me?".

We camped in City Park, and were right in the middle of what came to be known as the "riots", that ended camping there forever. I gotta admit, it was pretty crazy in there. People were drag racing up and down the blacktopped pathways, and more than a few guys wadded themselves up. I remember one guy losing it, and he slid thru a bunch of tents, and a couple caught fire, and melted themselves to the guy's bike. Lucky there wasn't anybody in the tents. They had brought in these flatbeds for the bands to play on, and inbetween the bands, they had tittie shows, pussy shows, and cucumber contests. All this could be seen from the Park if you were on Lazelle (34) going by. I guess I should mention the guys who printed up pussy raffle tickets, and you won their OL for a night if they drew your number. That's how they were financing their Sturgis trip!

It got so crazy, that the porta-potty people refused to come in and pump the pottys out, and they started to get overfull, and a little ripe. So, the people just pushed them over and burned them.

I've only missed four Sturgis' since '82. I still love to ride the Black Hills. I still see people up there that I'll only see once a year. Yeah, I've seen it go thru a lot of changes. Gone are the times where AMA-types, 1%ers, and independent riders all freely mixed and were genuinely friendly with each other on Main St. I've seen the attendence just explode over the years, and I've seen the increase of tourists that would have never thought of dragging their families down Main St. in the past. But, I still think it's the greatest Rally in the country, maybe the world. You just have to look harder for it now.

See you up there this year.