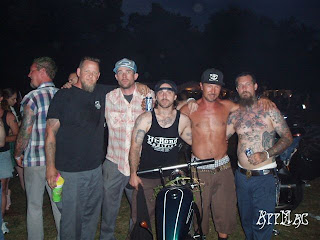 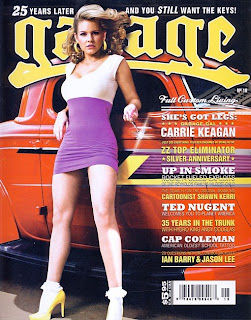 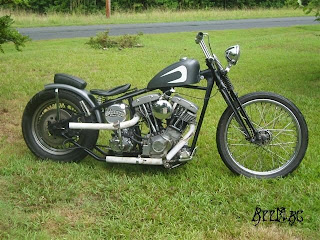 Aaron's Shovel, last version I have a picture of. It's changed a little. 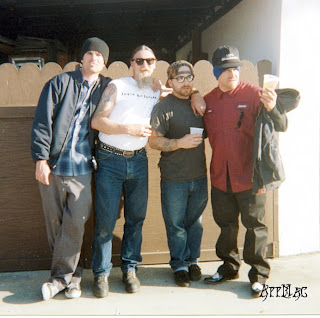 Four Sinners Nomads in the same place, at the same time - a rare occurance. Taken in '05. The last July 4th party at Dustin's place, in Long Beach, before the LBPD told us we weren't having any more parties there. I guess the City thought over 250 people were a few too many "guests" in his neighborhood. L to R: Brandon, me, Aaron, and Jason. If Cole, Job, and Decker would've been there, we'd have had a full set.

So, I'm looking thru the magazines at my local newsstand about a week and a half ago, and while the owner of the store is checking in new mags, he comes over to me and says "Hey, look, a new Garage came in!". I buy all my magazines there instead of by subscription, or at the chain bookstores, because I feel that you need to support the smaller independent outlets like his.
Anyways, I was as surprised as he was, because the last issue of Garage came out almost a year ago. I stuck it in with the other mags I was buying, and took them all home to read later. Well, I got busy around here, and didn't read Garage untill yesterday.
It's actually a pretty solid issue especially the articles on Spade George, Shawn Kerri, and Andy's Hydraulics. But you could have knocked me over when I Got to the article on my Nomad Brother Aaron Strickland. See, Aaron is the furthest away Sinner from SoCal, as in N. Carolina furthest out.

I haven't seen Aaron in close to four years, and I thought it was way cool to see him in print like that. I don't know if Aaron reads this blog or not, but I guess it doesn't matter. Hey, brother, I'm thinking about you, and I guess that's what's really important here.
Posted by Irish Rich at 5:05 PM

Garage Magazine is like an Eskimo, you know it exists but you NEVER see it.