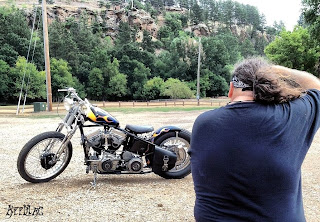 Leo Rickerman came to me from Colorado Springs about a year-and-a-half ago. He had a wishbone frame with a neck and backbone that had seen better days, but the frame otherwise was pretty solid. He asked for my opinion, because he wanted to build a chopper that he could take a trip to Sturgis on, when it was finished. I said if it was mine, I'd replace the neck and a partial backbone vs. trying to un-rake/restore what he had. Leo agreed, and I performed the surgery for him.
Leo's been diligently hammering away on his Pan, and finally he and his brother took their very first trip to Sturgis this year, Leo riding his completed Pan project all the way. Well, while they were there, Leo entered his Pan in the Cycle Source Chopper Show, and won Best In Show! On top of that, his bike was shot by Chris for a future feature in the magazine (see the above photo). How cool is this whole story?
Congratulations, Leo. Proud to be a small part in helping you to achieve both your goals.
Posted by Irish Rich at 11:14 PM

Rich, Thanks for the kind words about the Pan, that really means alot coming from you. My brother and I had the time of our lives at Sturgis this year. We met some really great people and were inspired by some great bikes, especially at the Mike Lichter exhibit.

You and your bike really earned that Best of Show award Leonard..I was proud to help pick your bike with Chris and to give you your award on stage!! Roadside Marty