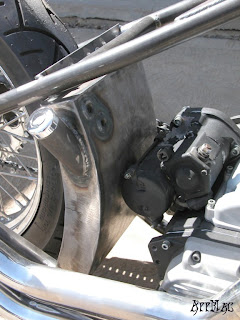 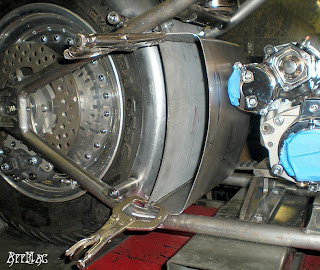 Yeah, you read right, I'm using a 1 1/2" wide secondary belt drive. I don't need to remind you that H-D has been running rear belts for over 2 decades, Phil Ross ran them, so does Sugar Bear. Nobody ever said anything to Indian Larry for running secondary belts on every bike he built from Voodoo Chili to Mr. Tiki's Shop Droppings. Larry, Phil, and Sugar bear knew where it was at, so to all you smarty-pants guys that love to type "Haw, haw...belts are for pants, haw, haw...", I'm gonna tell you guys that "Chains are for wallets, haw, haw". Belts are pretty tough, and if you get them aligned as they should be, tensioned where they need to be run, and use good quality belts, they can take some really hard punishment....stay tuned.
Posted by Irish Rich at 10:57 PM