In early 1975, two hard ridin' guys named George Lindberg and Mick Ream got tired of tearing the splines out of their front pulleys, and shucking the teeth off the then-available aftermarket primary belt drives, so they decided to do something about it. From this frustration came Primo Products. 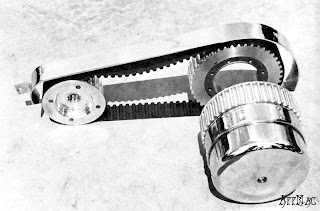 They enlisted the help of one of their other Harley riding friends, Bill Young, who just happened to be a aircraft machinist, to help them in designing and engineering a superior primary belt drive system. Young saw two big flaws in the then-current belt drive setups - the first being the machining of aluminum castings to make the pulleys, and second the belt tooth profiles.

Young introduced Lindberg and Ream to the rounded "metric belt" tooth profile, vs. the common square "Gilmer" toothed belt that was used in most of the current primary belt drive conversions. It was Young that suggested a 14mm profile, in a 1.57" wide drive belt. He also pointed out that most of the drag racers had already switched to the metric belt tooth profile for their blower drives. That was all the guys needed to hear.

Along with this new found belt technology, they decided to machine their pulleys from Young's suggested 7075 solid aluminum billets, not castings. They found the 7075 to be almost bulletproof for the application. No more ripped out splines in the front pulleys! And, just to make their front pulleys that much more bulletproof, they decided to machine and install a steel splined or tapered keyway center insert (depending on the application), even though the 7075 was more than adequate in that area.

And, as an added bonus, because of the 14mm metric tooth spacing, they were able to machine their pulley sizes to almost duplicate Harley's original primary drive ratio, something the currently available kits from others couldn't do. Most of the other primary kits were about a tooth and a half off the stock ratio. 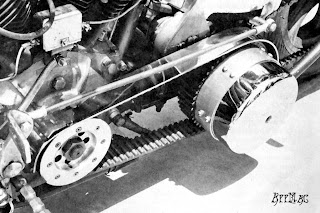 Early production run Primo belt drive in service. Does the clutch dome look familiar? It should, it's one of Paughco's standard air cleaner covers! Yep, it fit, was held on with 2 self-taping screws, and one cover came with each original kit.

Lindberg and Ream made an initial run of 30 of their kits in '75, and with Carl's Speed Shop and Arlen Ness as two of their first three early distributors, sold out immediately. Another run of 200 kits were made, and they dissapeared just as fast. After the first two runs, Primo Products was a full time operation.

Primo offered the complete belt drive installation free of charge if you brought your bike in to them, and if you mail ordered the drive, and shipped them your clutch hub, they'd install the pulley on your hub for free. They also offered lightning holes in the front pulley at no charge, and offered black, gold, red, and blue anodizing of their pulleys at a slight additional fee. They also offered their customers a 6 month warranty on their drives, too. 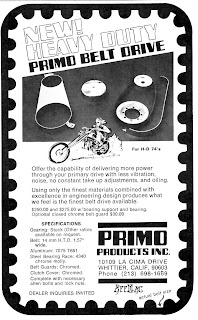 Primo's ad, that ran in most of the custom bike publications in '76.

Primo's primary belt drives were an instant hit, and along with Phil Ross's primary drives, became the standards in the industry. In 1978, Mel Magnet, owner of Rivera Engineering, bought out Primo Products, Inc., and merged the two Whittier, CA-based companies under the now famous Rivera-Primo banner.

Rivera-Primo has continued on for the last 32 years, still located in Whittier, and still leading the way in innovative primary belt drive technology and applications. It's the only belt drive system I'll use on my personal bikes, and the ones I build for my clients.
Posted by Irish Rich at 10:01 PM

Primo history lesson - I did not know that.
Thanks Rich !