Mel brought me this '49 wishbone frame awhile ago, to see if I could get it in shape for a period bobber project he's been collecting parts for. I sent it out to the blaster before I began, to see what was really there, and how many cracks the frame had hiding under the paint.
It, along with Part-timer Steves VL frame, and a set of handlebars spent THREE FUCKING WEEKS at the blasters. Here's what I got back, and we'll save Steve's VL frame for another post, because he's fucking off in Vegas right now...... 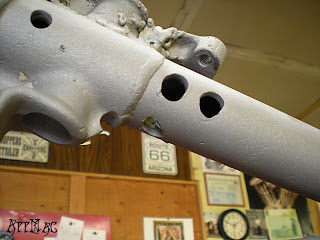 A common malady with old Knuck and Pan frames - a lot of owners, a lot of tank, fender, and seat swapping over 50 years, and a lot of misshapen holes. These are lulus! If you look thru the bottom hole, you can see the remnants of newspaper that they stuck in the holes before they bondo-ed over them. The neck lock mortise was stuffed with newspaper, and given the same treatment.

Notice the "agricultural grade" stick welding they did replacing the top fatbob/dash mount...then they cut it again, and then welded the dash pad back on cockeyed. 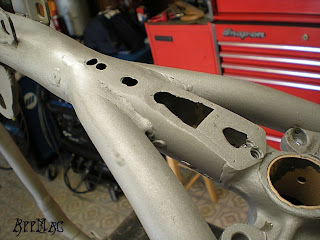 I burnt most of the bondo/newspaper filler out of this area before it went to the blasters. Nice work, eh? 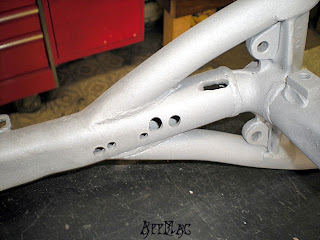 The underside of the backbone. One thing people have too many of in their toolboxes - screwdrivers and drill bits. 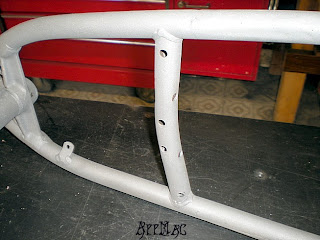 I don't know what would be more work - welding up these 12 (?) holes, or just cutting the crosstube out, and bending another one to fit.... 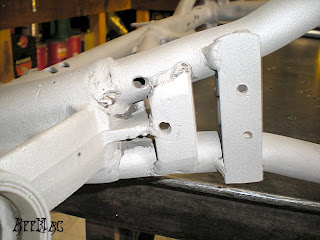 Evidently, somebody wanted to add the front crashbar back on when they added the fatbob mounts back. More "agricultural grade" welding here, too. What the hell was that hole in the downtube for???? 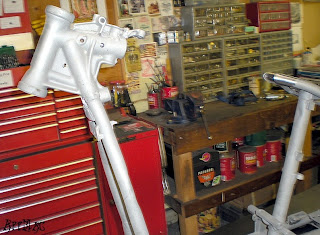 So...time to get the Sawzall and the cutoff wheel out, and remove the the old backbone. One thing I found interesting was right in the center of the neck, was a "9", with a "C" about a 1/2" below it, in Factory character stamps. I don't know if I've ever seen that before on a Pan frame. 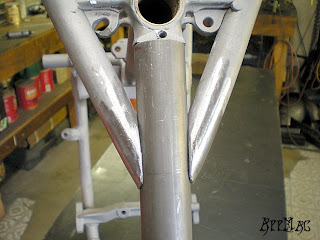 If you take your time, and peel the old backbone out the right way, this is the fit-up you'll have on the new backbone, and the lug on the seatpost will stay intact to slide the new backbone over again - just like factory. That's it for today, I'm tired, and it's Sunday.

Holy shit, it looks like it was used for target shooting!?