Know what these stainless laser cutouts in the picture below are from? They come from the original Indian Larry "?" rotors. I have a whole bunch of them. Where did I get them? well, follow along...... 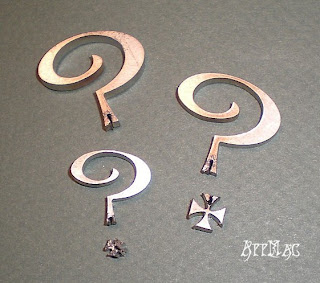 In '03, I was up in Sturgis, and ran into a friend of mine, Pete Slactowicz. Pete owns Front Range Choppers, and still runs that on a limited basis today. Pete has a bike collection that runs the gamut from Jeffersons, to Indian and Harley board and flat track racers, Factory Works XR 750's, Knucks, Pans, and everything in between. He also likes to dabble in all kinds of other business ventures, too. In '03, Pete was involved in a company called Deep Cut Rotors, which made a line of laser cut stainless custom brake rotors, and could also cut rotors in any design you could think of.

Pete asked if I thought Indian Larry would be interested in a line of "signature" rotors for his shop. I told him that Larry was down in the Camel Roadhouse, and to just go down there and introduce himself. Pete gave me his business card, and said if I talked to Larry again, to give him the card.

Well, no sooner than Pete left, Larry came wandering down Main St. He stopped to talk for a bit, and I told him about Pete's idea. Larry was pretty interested, and told me that he was taking a break from the Roadhouse for about an hour, but to get ahold of Pete, and send him down. I got Pete on his cell, and told him to meet me in about an hour, and we'd talk to Larry then.

Pete and I walked down to the Roadhouse, and I introduced him to Larry, and left them to talk business. I saw Pete later, and he said they were going to get together a couple weeks after Sturgis, and it looked like Larry wanted some of his trademark "?" marks done in the rotors.

Well, Pete and Larry agreed on a deal, and from what Pete told me, they did it all on a handshake, no written contract. Pete got a few different design layouts off to Larry, and he picked the design you see in the photo below. Pete initially made a few dozen "?" rotors, and sent them off to Larry in NYC for his approval. Larry loved them. 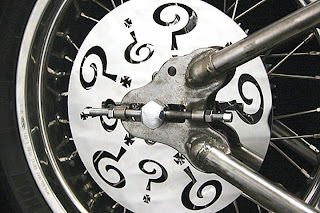 If I remember correctly, the first time the Deep Cut-made "?" rotors appeared on an Indian Larry-built bike, was in '04, on his Mr. Tiki's Shop Droppings or the Bamboo bike. It toured the country that year as part of the Easyriders Centerfold Tour. Larry built Mr. Tiki out of mostly leftover shop parts, but he used 3 of Pete's 11 1/2" rotors on the build.
Larry also used one of the "?" rotors on the rear of his last Biker build-off bike, the now-famous Chain Of Mystery bike, which also featured what I think was the finest engraving work that CJ Allan has ever done. Pete was really stoked about Larry using his rotor on that bike.
Shortly after Larry died, Pete (as he is wont to do) tired of the rotor business, and sold his share of Deep Cut to his partner in the operation, James, and concentrated on his shop and antique bikes. James continued to make rotors for Indian Larry Legacy, and Paul and Keino used them on Zarathustra's Revenge, Brooklyn Beatnik, and Tempting Fate, along with other ILL-built bikes, and also sold them in their online catalog. One "?" rotor was also used on the Love Zombe tribute bike built by Paul, Keino, Billy Lane, and Kendall Johnson

I'm not sure what exactly happened to Deep Cut, or James for that matter, but Deep Cut ceased to exist. Pete still had a good supply of rotors, but when the ILL supply was finished, and Pete's backstock sold out, they were nowhere to be had. I used to get calls all the time on them, but I didn't have anybody to send them to for the rotors. I even got a call from Keino one time, wanting to know if I knew where any were stashed, but I couldn't help him, either.

I talked to Bobby Seeger in Sturgis this year, and he told me that he had a manufacturer that was making him the "?" mark rotors again, and I see they are for sale again on the ILL website. Few people know that Pete also did Indian Larry "?" sprockets, too. They were done on a very limited run, and there aren't a lot of them out there. They are extremely rare.

everytime i check in rich, i get a great story.......when is the book coming out?

best written...wish i was spoken to with that story...