OK, it's not Monday, but yesterday was Labor day, so it doesn't count! 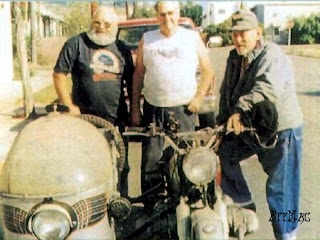 Here's a pretty rare photo, and I'm not sure where I got it from. I found this a long time ago. I remember it was kinda small, and this is the best I could do.

It's a photograph of (L to R) Wino Willie Forkner, JD John Cameron, and Von Dutch, standing around Dutch's Beemer package express rig. Not sure when it was taken, but it had to be close around the early '90's because Dutch doesn't look good at all physically - he's pretty skinny and bony. I have photos of Von Dutch taken at the Brucker Ranch that were done about a month before Dutch died, and he looks about the same as he does in the above photo.

The guy who took the photos at the Brucker's place in '92 was a longtime friend of Dutch's. When he gave me the prints, he made me swear I'd never post them on the 'net, or use them in an article. That was 14 years ago, and I never have, and never will.

Von Dutch died in '92, with John Cameron passing away in '96, and Wino Willie in '97. That was a lot of motorcycle history to go in a 5 year period. 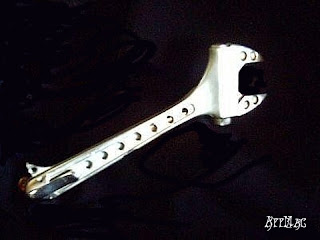 Here's a tool that I've always wanted to copy from Von Dutch. Dutch called this his "Biker's Pal". At first glance, it looks like an ordinary Crescent Wrench, but on closer evaluation...... 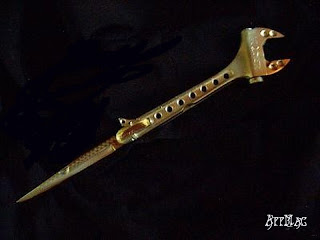 .....with the push of a lever, an Italian switchblade mechanism springs a stiletto blade into play. Notice the engine turning on the blade, and the lightning holes in the wrench body. Just the thing for fast action - whether you're tightening that loose axle nut, or slicin' and dicin'. Oh that Von Dutch, what a utilitarian, haha!
Posted by Irish Rich at 10:30 AM

the coolest history classes i`ve ever had. thanks