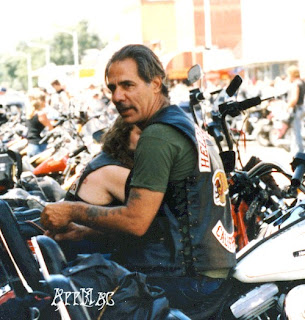 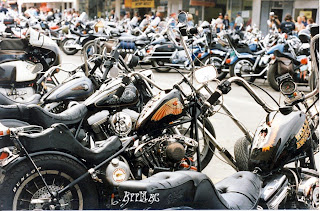 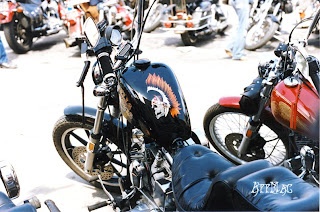 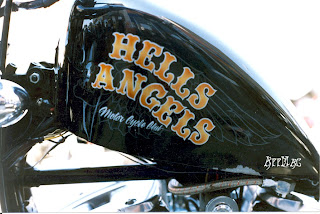 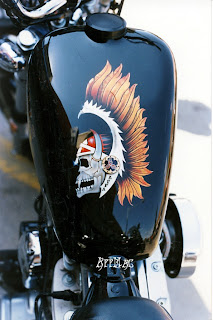 It's hard to see the intricate hand-painted details in the gold leaf feathers, and the subtle shading and color highlighting that the skull has from this now 23 year old photograph. You'd have to see it in person to appreciate it fully. Lots of pride and craftsmanship in this tank.
Posted by Irish Rich at 10:48 AM

By Hand and By Brain said...

This is so cool Rich! My intor to bike was through my pops but indirectly. Larry Joe 'Sleeves' was the welder at my pops forklift shop in Oxnad CA. Laryy was proudly HAMC. He was like a big brother. really. kept me stoked on fast bikes, #1 his trike and brass knuckles. He had very similiar paint on his bike and I remember him getting additional work done to it off of Sturgis road in Hueneme at a truck stop by an old VietNam bvet who pinstriped tanks. It was incredible work that I appreciate in hind site. Larry Joe schooled me on the fine art of bike paint. R.I.P. LJ never forget.
Thanks Rich!!
J-