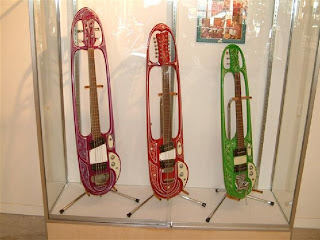 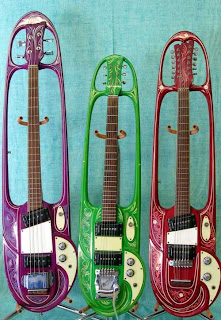 If you go back a ways in my blog, you'll see where I mentioned that Von Dutch had done the bass drum face for Michael Clarke of the Byrds. Here's something that you might not have known, either.

These guitars were made by Semie Mosley, of Mosrite guitar fame. Mosley is credited with building the first triple neck guitar, and his custom-built guitars were used by the Ventures, Arthur Lee and John Echols from the band Love, and Mosley also made all of Johnny Ramone's guitars.

These three guitars above (bass, 6 string, and 12 string) were made by Mosley, and given to the band The Strawberry Alarm Clock. When Mosley was finished constructing them, he sent them to Von Dutch while he was set up in Reseda, sometime in '67, to paint and pinstripe them.
As far as anybody knows, The Strawberry Alarm Clock never played these guitars on stage, even though the guitars were said to play and sound extremely well. The only "public" appearance of the band seen playing them was in the '70 film Beyond The Valley Of The Dolls, and the band appeared as themselves, performing in a club doing (what else) Incense and Peppermint.

Semie Mosley got the guitars back from the group when they disbanded in '71, and when Mosley died, his estate sold them to a food suppliment magnate who was a guitar collector. When he died in the '90's, they went up on Ebay, and now reside with another famous guitar collector.
Posted by Irish Rich at 10:54 PM

Very very cool.Thanks for posting these up.

Apparently there were two sets made according to Steve Soest who is a reliable guitar afficianato from Orange, CA. He had the extra set back in the '80s.

What did he give as a reason to do two sets? I wonder why you'd give a band two sets of the same custom guitars?